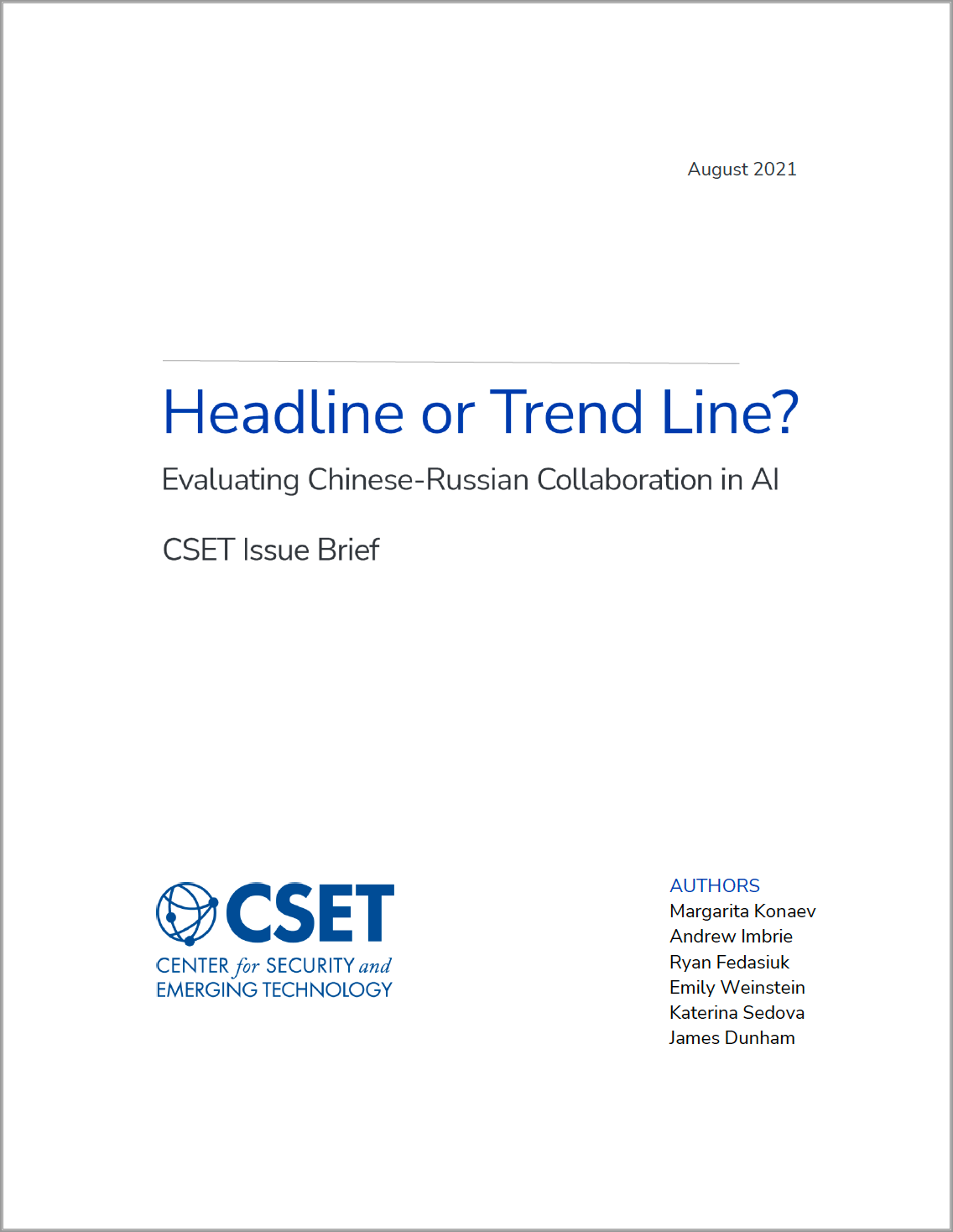 China and Russia have declared 2020 and 2021 as years of scientific and technological innovation cooperation, focusing on biotech, artificial intelligence, and robotics.1 Both countries view AI as critical to their respective domestic and foreign policy objectives, and they are ramping up investments in AI-related research and development, though China’s investments far outweigh Russia’s. U.S. observers are watching this convergence between America’s two key competitors with increasing concern, if not alarm. Some worry that alignment between Beijing and Moscow, especially in the areas of science and technology, could accelerate the development of surveillance tools to enhance authoritarian control of domestic populations. Others warn that deepening Sino-Russian cooperation will dilute the effects of sanctions on Russia. Still others fear that the strengthening partnership between China and Russia will undermine U.S. strategic interests and those of its democratic allies in Europe and Asia.2

Chinese and Russian sources are keen to publicize their “comprehensive strategic partnership of coordination for the new era,” potentially underscoring the seriousness of their joint ambitions.3 Yet the scale and scope of this emerging partnership deserve closer scrutiny, particularly in the field of AI. To what extent are China and Russia following up on their declared intentions to foster joint research, development, and commercialization of AI-related technologies? In other words, how do we separate headlines from trend lines?

This issue brief analyzes the scope of cooperation and relative trends between China and Russia in two key metrics of AI development: research publications and investment. Our key findings are as follows:

Our findings both confirm assessments of the expanding partnership between China and Russia and add an important caveat with regards to its scope and limitations. There has been a steady increase in AI-related research collaboration between the two nations and an even steeper rise since 2016. This upward trend mirrors the global expansion of AI research, propelled by increased computing power and the availability of large datasets. The overall number of joint Chinese-Russian AI-related publications, however, remains relatively low—whether as a share of each country’s scholarly output or compared with the number of papers researchers from China and Russia co-authored with researchers from the United States over the same period of time.

The AI-related investment data tell a similar story—an upward trend in Chinese-Russian investment deals over the past five years, but the overall value remains relatively low. Russia seems to be investing more in private AI companies in China than China invests in the Russian AI ecosystem. Yet the United States remains Russia’s primary destination for AI investment, and the value of U.S.-China AI investments is much greater than the sum of Chinese-Russian deals.

Two caveats are worth underscoring. First, these metrics provide insights only into specific aspects of a much broader relationship. Second, the time frame of our analysis and data limitations preclude definitive judgements. By focusing on collaborative research and AI-related investments, we seek to develop useful indicators for tracking progress in the Chinese-Russian high-tech partnership. Our findings expose gaps between Chinese and Russian aspirations and the reality on the ground, bringing greater accuracy and nuance to current assessments of Sino-Russian cooperation.