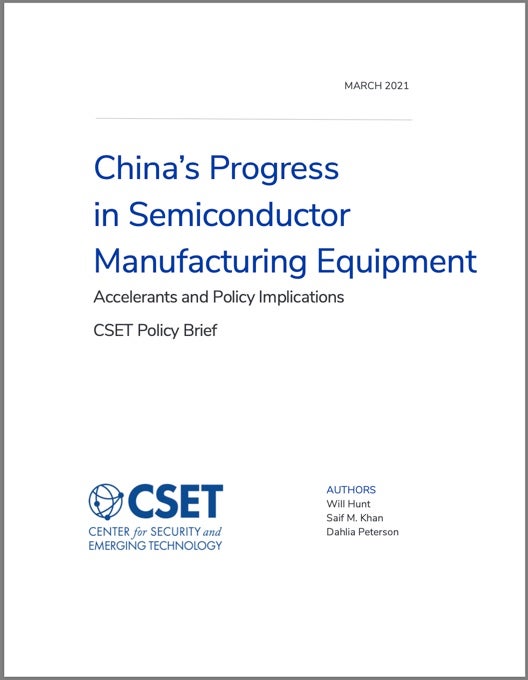 China has a chip problem. It depends entirely on the United States and U.S. allies for access to advanced commercial semiconductors, which underpin all modern technologies, from smartphones to fighter jets to artificial intelligence. China’s current chip dependence allows the United States and its allies to control the export of advanced chips to Chinese state and private actors whose activities threaten human rights and international security. Chip dependence is also expensive: China currently depends on imports for most of the chips it consumes.

China has therefore prioritized indigenizing advanced semiconductor manufacturing equipment (SME), which chip factories require to make leading-edge chips. But indigenizing advanced SME will be hard since Chinese firms have serious weaknesses in almost all SME sub-sectors, especially photolithography, metrology, and inspection. Meanwhile, the top global SME firms—based in the United States, Japan, and the Netherlands—enjoy wide moats of intellectual property and world-class teams of engineers, making it exceptionally difficult for newcomers to the SME industry to catch up to the leading edge.

But for a country with China’s resources and political will, catching up in SME is not impossible. Whether China manages to close this gap will depend on its access to five technological accelerants:

The United States and its allies should more tightly control the export of technical data to China, but use deemed exports in a more targeted, limited way. Controls on technical data would reduce China’s access to explicit knowledge. However, the United States should apply deemed export controls more sparingly by expanding exemptions and should process licenses more quickly. This would ensure foreign nationals stay in the United States and contribute to U.S. industry, while taking a targeted approach to protecting against technology transfer.

The United States and its allies should export control advanced SME itself, especially any SME that China has yet to acquire. These controls would deny China the ability to reverse-engineer SME, an important source of explicit knowledge. Controls on SME would also slow the development of advanced Chinese fabs, weakening China’s semiconductor ecosystem.

The United States should prioritize assessment of SME component chokepoints, their value-add to SME, and vectors of technology transfer. These assessments would reveal additional policy options, including further SME components to target with export controls.

The United States and its allies should promote continued SME innovation through investments in R&D and workforce development. For now, leading SME firms based in the United States and allied countries enjoy an incumbency advantage: unlike Chinese SME firms, they have access to critical product feedback and revenues derived from sales to leading global semiconductor fabs. Workforce and R&D investments would help accelerate the pace of SME innovation, allowing U.S. and allied firms to sustain their incumbency advantage in the years ahead.