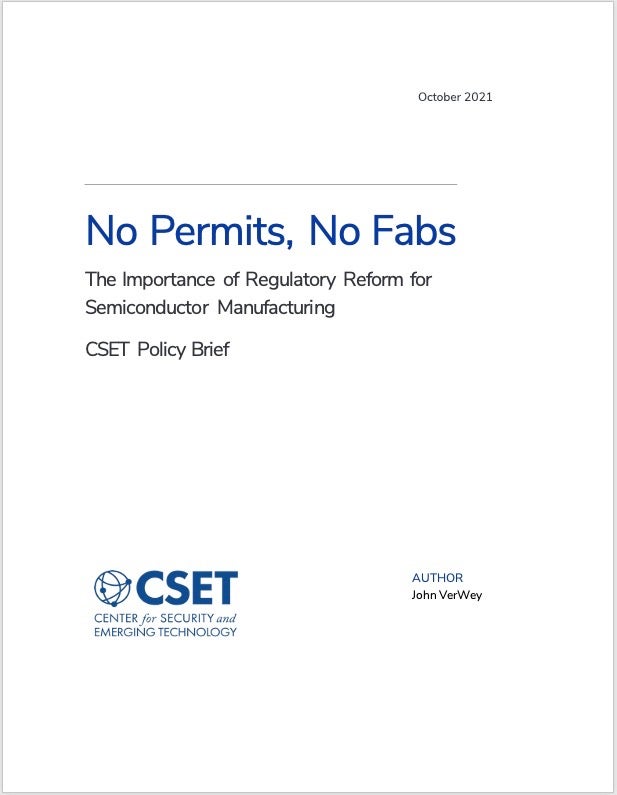 No Permits, No Fabs

The Importance of Regulatory Reform for Semiconductor Manufacturing

Congress has advanced legislation to appropriate $52 billion in funding for the CHIPS for America Act, which aims to increase semiconductor manufacturing and supply chain resilience in the United States. But more can be done to improve the resiliency of U.S. access to microelectronics beyond manufacturing incentives. This report outlines infrastructure investments and regulatory reforms that could make the United States a more attractive place to build new chipmaking capacity and ensure continued U.S. access to key inputs for semiconductor manufacturing.

The ongoing global chip shortage, coupled with China’s heavy investments in indigenizing semiconductor manufacturing capabilities, has brought attention to the importance of semiconductors to the U.S. economy, the fragility of semiconductor supply chains, and the decline of U.S. chipmaking capacity over the past three decades. In part as a result of this attention, Congress has advanced legislation to appropriate $52 billion in funding for the CHIPS for America Act. Approximately $39 billion will likely go toward incentivizing semiconductor manufacturers to build new chipmaking capacity in the United States.

But more can be done to improve the resiliency of U.S. access to microelectronics beyond manufacturing incentives. This report outlines infrastructure investments and regulatory reforms that could make the United States a more attractive place to build new chipmaking capacity and ensure continued U.S. access to key inputs for semiconductor manufacturing.

The United States currently builds fewer fabs at a slower rate than the rest of the world. Part of the reason for this is permitting regulations which require long assessment timelines.

Fabs have extensive infrastructure requirements, which interact with federal, state, and local regulations in complex ways. Modern fabs require access to (1) large plots of (2) seismically inactive land with a reliable, affordable, and stable supply of (3) water, (4) electricity, (5) talent, (6) transportation infrastructure, and (7) nearby land for co-locating with suppliers essential for constructing and operating a modern fab.

The CHIPS Act correctly aims to increase the number of fabs constructed in the United States, but regulatory support and infrastructure investments are needed to ensure that these new fabs are built on time and on budget. The United States government should prioritize regulatory support at the local, state, and federal level to expedite fab construction. In particular, full implementation of several recommendations from the 2017 President’s Council of Advisors on Science and Technology related to environmental review and permitting of high technology facility construction are essential.1 The United States should also make infrastructure investments targeting utilities, transportation, and supply chain networks that will assist semiconductor manufacturers.

Engagement with allies will be essential for increasing resilience in the semiconductor materials, gases, and chemicals supply chain. In the medium to long term, increasing domestic production and/or stockpiling should be considered. Increasing domestic United States production of many raw materials and chemicals is contingent on opening new mining and/or refining operations, which would require extensive permitting. Thus, coordination with allies who already have existing production and refining capacity may be more expeditious than attempting to establish new capacity in the United States. Though many of these materials have a limited shelf life, stockpiling of certain materials, modeled after existing United States government programs like those operated by the Defense Logistics Agency Strategic Materials, may be an option.

The United States should quantify demand for key material inputs, identify potential alternatives, and support their development. Ongoing efforts supported by the Environmental Protection Agency and the semiconductor industry to develop substitutes for environmentally harmful greenhouse gases used in semiconductor manufacturing could serve as a template for further work to identify substitutes for certain materials, chemicals, and gases used in semiconductor manufacturing for which there is no commercially viable domestic supply.

No Permits, No Fabs

John VerWey, "No Permits, No Fabs: The Importance of Regulatory Reform for Semiconductor Manufacturing" (Center for Security and Emerging Technology, October 2021). https://doi.org/10.51593/20210053