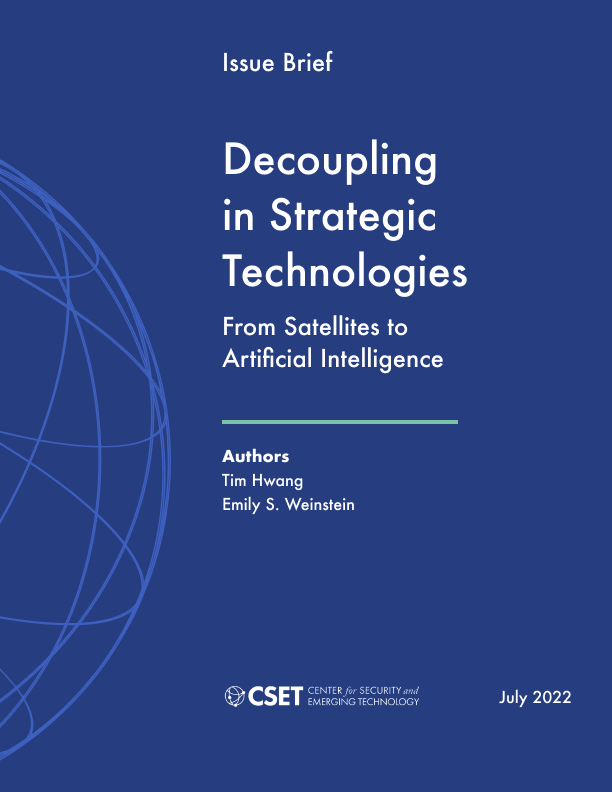 From Satellites to Artificial Intelligence

Geopolitical tensions between the United States and China have sparked an ongoing dialogue in Washington about the phenomenon of “decoupling,” the use of public policy tools to separate the multifaceted economic ties that connect the two powers. This process has already begun, with a range of steps taken in recent years on both sides of the Pacific to reshape the bilateral economic relationship.

This issue brief studies the efficacy of one specific aspect of this broader decoupling phenomenon. Specifically, it examines the use of export controls and related trade policies to prevent a rival from acquiring the equipment and know-how to catch up to the United States in cutting-edge, strategically important technologies. This objective has already motivated some of the most widely discussed events of the “decoupling era” in U.S.-China relations. The Committee on Foreign Investment in the United States, for example, has been active in blocking Chinese firms from accessing specific types of leading-edge semiconductor designs.

To study the efficacy of these tactics, this issue brief examines past efforts by the United States to decouple supply chains in satellite technology. For decades, an array of export controls and other regulations have worked to prevent rivals from accessing key technologies for satellites designed and manufactured in the United States. The satellite domain affords the opportunity to examine the effectiveness of decoupling policies in the context of a suite of emerging technologies considered strategically important. These lessons have contemporary relevance as U.S. policymakers consider establishing similar regimes in the current generation of strategic emerging technologies like artificial intelligence (AI).

This paper addresses two critical questions. First, to what extent does history support the hypothesis that decoupling is an effective tool in blocking access and slowing the progress of a rival in an emerging technology? Second, to the extent that it can be a tool in achieving this aim, what factors make decoupling policies more or less successful?

This analysis uncovers a number of valuable insights. For one, it is clear that decoupling is a viable strategy: export controls can indeed play a powerful role in reshaping supply chains and limiting rival access to emerging technology. At the same time, the satellite example tempers our expectations about what decoupling can achieve. It is clear that decoupling regimes are imperfect and frequently act as a hindrance, rather than an absolute bar, to a rival’s technological progress. Moreover, the transition of a hard-to-access, cutting-edge technology to a widespread, commodified one over time means that the effectiveness of decoupling tactics declines dramatically over time. The satellite domain suggests that strategically important technologies can and will be acquired by a motivated rival, and decoupling can help to determine when that might happen.

Decoupling is a narrow tool of national competition in emerging technologies. It has limited impact, in the sense that it appears difficult to use decoupling to permanently bar a rival from catching up in a given technology. It also has limited scope in that the specific supply chain geographies of certain technologies lend themselves to more effective decoupling regimes than others. But, to the extent that imposing even a temporary delay in the progress of a rival is valuable, and where the technology in question is amenable to effective decoupling, the tactic offers an attractive option.

This paper is organized in two parts. First, we examine the case study of satellite technology, evaluating the effectiveness of decoupling as a strategy in that domain and the factors that shaped success and failure. Second, we apply those lessons to the contemporary case of artificial intelligence, finding that while aspects of AI competition do support the need to find ways of imposing even temporary delay in rival progress, the tactic of decoupling is fundamentally limited in achieving this end.