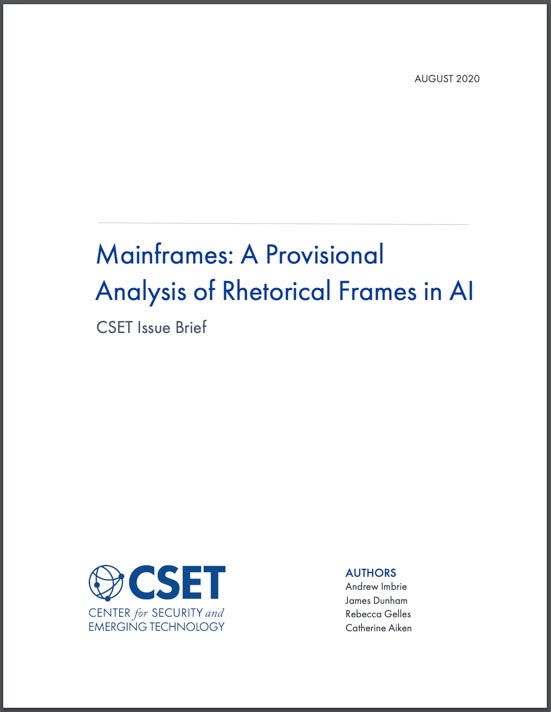 When it comes to artificial intelligence, the headlines suggest that great powers are engaged in an AI arms race: “For Superpowers, Artificial Intelligence Fuels New Global Arms Race,” reads one story in Wired. 1 “China is Winning a New Global Arms Race,” observes Bloomberg Markets and Finance.2 One report in The Wall Street Journal asserts, “The New Arms Race in AI.”3 To what degree do these headlines accurately represent elite opinion about AI?

Framing technological competition as an “AI arms race” or “battle for supremacy” has implications for policy, security, and international cooperation.4 Maintaining U.S. leadership in strategic areas of artificial intelligence is an important policy objective, but AI is a general-purpose technology that enables a vast array of applications. The AI arms race narrative obscures more than it reveals about which applications deserve priority and how the United States can shape norms and standards to guide the development of AI and machine learning consistent with democratic principles.5 Perceptions of an arms race in AI could lead great powers to disregard investments in safety and security. Further, arms race dynamics may inhibit cooperation and increase the risk of miscalculation or misperception involving the use of AI-enabled platforms and capabilities.6

Are the great powers engaged in an AI arms race? Emerging patterns in mass communication provide insight. Opinion makers use language to influence the behavior of others and justify new investments and directions in policy.7 Public perceptions of AI shape the calculus of national leaders. Rhetorical framing of AI therefore serves as a barometer for both public and elite opinion, indicating whether attitudes are becoming more cooperative or competitive over time.

In this paper, we develop a novel methodology to explore the rhetorical framing of AI. We searched more than 4,000 English-language articles over the 2012 to 2019 period from the global news outlet Reuters, the U.S.-based Defense One, and Foreign Affairs and identified references to “AI competition.”8 This frame describes AI development as a race between two or more actors, such as governments or companies—whether in military or non-military terms. Invocations of the frame include the following:

In addition to capturing occurrences of the frame over time, we identified the purpose for which it is invoked. We classified the purpose of the “competition” frame as motivation (for changing the status quo), explanation (of the state of the world), or critique (of the frame itself).

Our provisional findings are as follows: