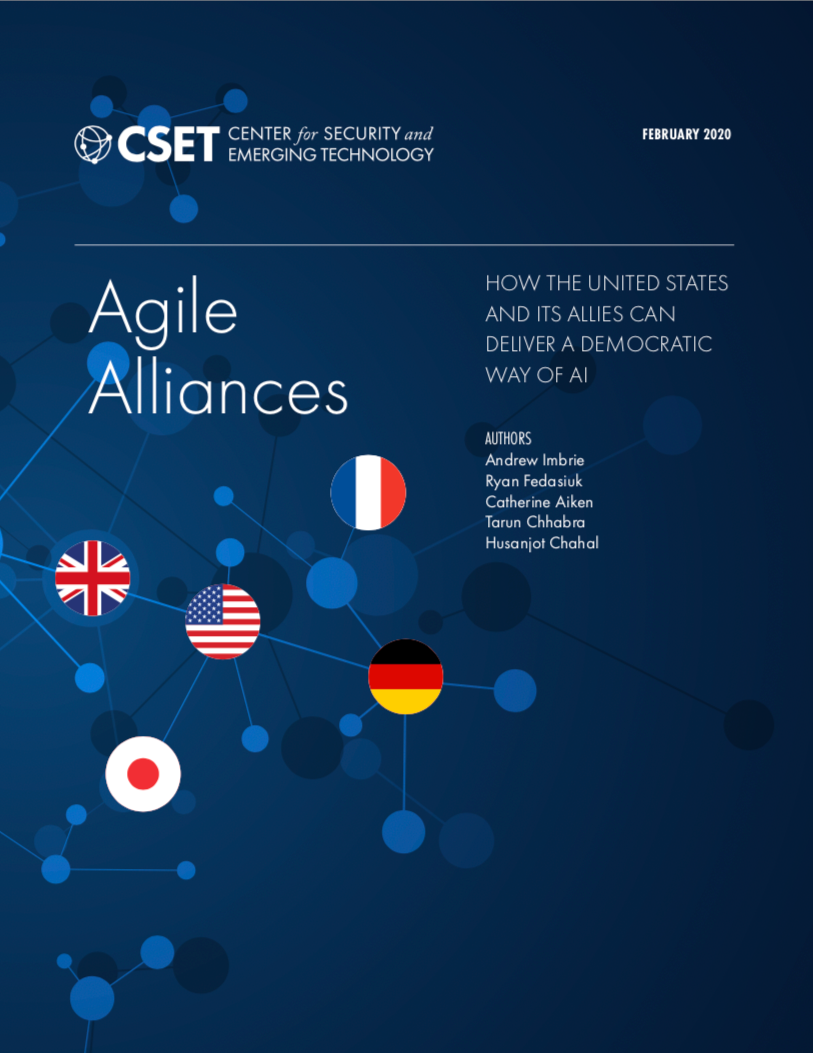 How can the United States collaborate with allies and partners to shape the trajectory of artificial intelligence in ways that will promote liberal democratic values and protect against efforts to wield AI for authoritarian ends?

This question is both important and urgent. It is important because America’s broad network of alliances and security partnerships is a singular asset in defending liberal values. It is urgent because China, Russia, and other authoritarian powers seek to achieve strategic advantage through AI and the export of censorship and surveillance technologies to countries across the globe.1 By one estimate, more than 100 countries purchase surveillance and censorship gear from China and Russia, receive training on these technologies, or simply imitate methods of surveillance and censorship that are designed to control public opinion and stifle dissent.2

All democratic nations must work together to uphold basic principles, set international rules of the road, and articulate a positive vision for the future in the age of AI.Andrew Imbrie and Ryan Fedasiuk

As the digital and physical environments become intertwined, authoritarian practices in one domain will increasingly encroach upon the other. At stake are the core values of liberty, equality, and justice that underpin free and open societies. All democratic nations must work together to uphold basic principles, set international rules of the road, and articulate a positive vision for the future in the age of AI.

Within the United States, and certainly within allied countries, debate persists over the threat of digital authoritarianism and how to counter it. While U.S. allies will likely vary in their strategic orientations toward China and Russia, there is a growing consensus on the need to showcase a democratic way of AI. These debates will take shape in a world of globalized markets for AI talent and integrated supply chains. In this context, the right U.S. approach would leverage its network of allies and partners to safeguard democracy and liberal values. An alliance-centric strategy provides a competitive advantage over any single country that attempts to develop a robust AI ecosystem on its own.

The United States and its allies should play to their strengths. This positive agenda begins with shaping the ecosystems for the development and deployment of safe and reliable AI. The most effective approach would capitalize on advances in AI and machine learning to foster sustainable and inclusive economic growth, improve service delivery, and promote transparent and accountable governance. The United States and its allies should pursue a vision of the future in which AI enables strengthened data privacy standards and respect for civil liberties; economic empowerment of citizens within rules-based market economies; cleaner, safer, and more efficient transportation; precision medical diagnosis; greater access to education; and more effective disaster response.

This report presents novel, if preliminary, data to make the case that the United States can work with like-minded allies and partners to forge a democratic way of AI.3 It offers the first comprehensive analysis of how the United States can cooperate with allies and partners in AI by drawing on several original data sets, including a cross-national survey of official government representatives, a unique coding of national AI strategies, and a comparative assessment of Chinese professional and technology associations in U.S. allied and partner countries. To supplement these measures, we aggregate data from multiple sources to assess U.S. allies and partners according to their capability and compatibility in AI and machine learning.4

Based on this analysis, the report proposes 10 strategic initiatives for the United States to pursue with its allies and partners. It identifies the optimal partners on each initiative and highlights existing multilateral channels for engagement. A unifying appeal to shared values would not only safeguard those values, but also advance AI research and development, protect supply chains and sensitive technologies, and promote collaboration among U.S. allies and partners on critical security and economic priorities.

The United States and its allies should pursue a three-pronged strategy: (a) defend against the threats posed by digital authoritarianism, (b) network with like-minded countries to pool resources and accelerate technological progress, and (c) project influence and leverage safe and reliable AI in support of inclusive growth, human rights, and liberal democratic values.

To that end, we recommend the following 10 initiatives:

Initiative 1: Prevent the transfer of sensitive technical information. U.S. counterintelligence, law enforcement, and other relevant government officials should coordinate with their counterparts in allied countries to gather and analyze data on technology transfers at scale, standardize visa screening procedures, and develop shared standards and metrics to evaluate transactions over the short, medium, and long term.

Initiative 3: Exploit hardware chokepoints. The United States should co- ordinate with allies and partners on export controls targeting components of the supply chain that increase the probability of maintaining China’s dependence on imports of AI chips.

Initiative 5: Invest in privacy-preserving machine learning. To protect individual privacy, the United States and its allies and partners should explore techniques in data analysis that would allow them to perform operations on non-sensitive datasets without sharing or storing personally identifiable information.

Initiative 6: Promote interoperability and agile software development. As countries integrate AI into military systems, the United States and its allies must ensure that hardware and digital systems are interoperable and secure, beginning with common standards for interpretability, safety, and security of AI systems, including AI-enabled, safety-critical systems.

Initiative 8: Develop inter-allied human capital for AI. The United States should facilitate the exchange of knowledge and best practices on AI among allied and partner countries by convening workshops among AI researchers, fostering international networks of AI researchers, and deepening partnerships with existing networks, including coordination with the private sector on job placement and training programs.

Initiative 9: Shape global norms and standards for AI. Building on the Organization for Economic Cooperation and Development Principles on AI, the United States should lead a multilateral effort with allies and partners to set international rules of conduct for AI, including standards for testing, evaluation, verification, and validation of AI technologies, as well as common practices for certifying companies that support democratic values and privacy.