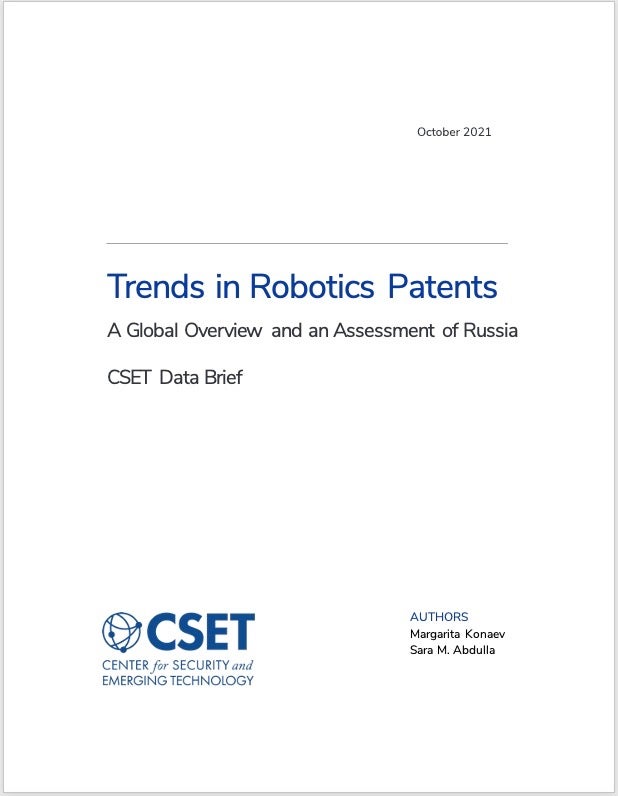 A Global Overview and an Assessment of Russia

Whether it is the Roomba vacuum taking over mundane household activities or NASA’s sophisticated rovers exploring the surface of Mars, robots are performing an increasingly varied range of tasks in today’s society. Networked and mobile industrial robots are transforming the traditional assembly lines in automotive and electronics factories. Surgical robots are performing intricate medical procedures, while telepresence robots are changing how patients communicate with their healthcare providers. Drones in different sizes and degrees of autonomy are used for a broad range of tasks, from crop monitoring for sustainable agriculture practices to surveillance and targeted strikes in military operations. Innovation in robotics technology therefore has significant strategic, economic, social, legal, and moral implications.

Patent activity is one useful indicator of technological advancement in robotics. Designed to protect invention and intellectual property, patents are a linkage between science, technology, and commercial activity. Trends in patenting provide information about the vibrancy and dynamism of the broader innovation ecosystem. Invention and innovation are not a zero-sum game, and the transfer and diffusion of certain technologies can have economic and societal benefits across national borders. That said, patents—and robotics patents in particular—are also an important part of the equation when assessing scientific and technological competition.

This report provides an overview of global trends in robotics patents granted to inventors across 88 countries between 2005 and 2019. While discussions and policies aimed at winning the global technology competition typically focus on China as the principal strategic competitor of the United States, Russia’s advances in emerging technologies such as robotics and AI, especially for military applications, can undermine U.S. strategic interests and merit further attention. With that, the report also delves into robotics patenting activity in Russia, and assesses the landscape of military robotics patents, both in Russia and around the world.

Examining global patent activity between 2005 and 2019, our key findings are as follows:

Margarita Konaev and Sara M Abdulla "Trends in Robotics Patents: A Global Overview and an Assessment of Russia" (Center for Security and Emerging Technology, November 2021). https://doi.org/10.51593/20210012.

Since 2011, China has dramatically grown its robotics sector as part of its mission to achieve technological leadership. The Chinese government has encouraged this growth through incentives and, in some cases, subsidies. Patents in robotics have surged, particularly at Chinese universities; by contrast, private companies comprise the bulk of robotics patent filers around the world. China has also seen a corresponding growth in robotics purchasing and active robotics stock. This data brief explores the trends in robotics patent families published from China as a measure of robotics advancement and finds that China is on track to emerge as a world leader in robotics.