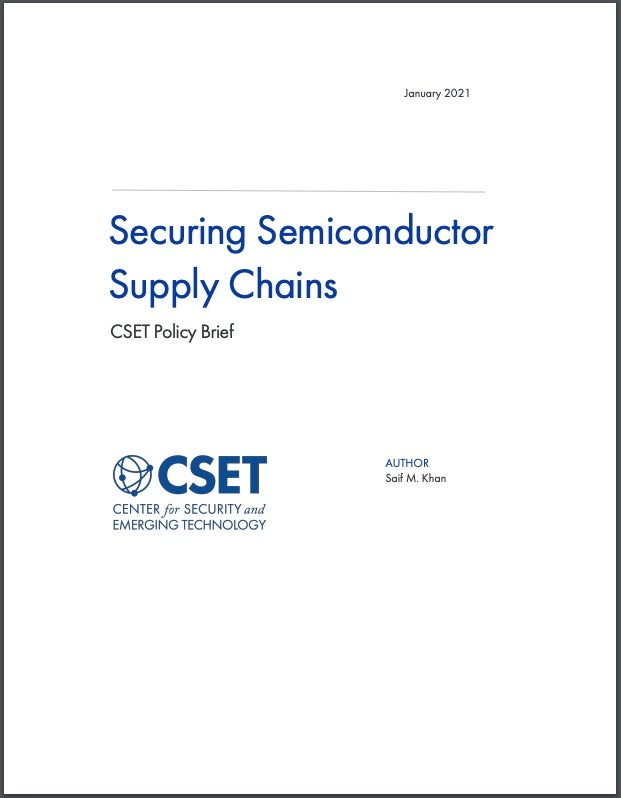 The countries with the greatest capacity to develop, produce and acquire state-of-the-art semiconductor chips hold key advantages in the development of emerging technologies. At present, the United States and its allies possess significant leverage over core segments of the supply chain used to produce these chips. This policy brief outlines actions the United States and its allies can take to secure that advantage in the long term and use it to promote the beneficial use of emerging technologies, such as artificial intelligence.

The United States and a small number of democratic allies dominate supply chains producing advanced computer chips, but this advantage could erode without new, targeted policies. Advanced computer chips underpin virtually all important technology today. China is investing heavily in becoming a new center of gravity in chip production and could succeed in developing state-of-the-art capabilities.

Advanced chip supply chains are among the world’s most complex and globalized. Their globalization sustains innovation by bringing together worldwide resources and talent pools. Indigenizing the entire supply chain for producing advanced chips would prove incredibly difficult and costly for any country, including the United States. But together, the United States and its allies—above all, Japan, the Netherlands, Taiwan, South Korea, the United Kingdom, and Germany—enjoy a competitive advantage at nearly every step of the supply chain needed to produce these chips.

Historically left out of advanced segments of these supply chains, China seeks to join semiconductor leaders. China is lavishing unprecedented subsidies on its semiconductor industry to indigenize its supply chains. It heavily subsidizes chip design firms and chip factories (“fabs”) turning their designs into chips. Together, these efforts have given China local chip production capabilities—albeit several generations behind the state of the art.

China’s efforts pose risks to national and international security. First, China’s subsidies could provide an independent ability to manufacture state-of-the-art chips. Underpinning all industry, the information economy, and military power, these chips are especially necessary for many emerging technologies, such as artificial intelligence. China could then deploy these technologies in dangerous and destabilizing ways (e.g., by starting arms races) or violate human rights and democratic values (e.g., by enhancing surveillance and other authoritarianism friendly technologies). Second, rising costs, economies of scale, and the clustering of know-how allow only small numbers of semiconductor firms to profitably operate at the state of the art. China’s success in developing state-of-the-art firms could displace leading U.S. and allied semiconductor firms, thereby harming their countries’ supply chain security.

Five other policies stand on their own but also increase the effectiveness of export controls. Specifically, the United States and allied democracies should: