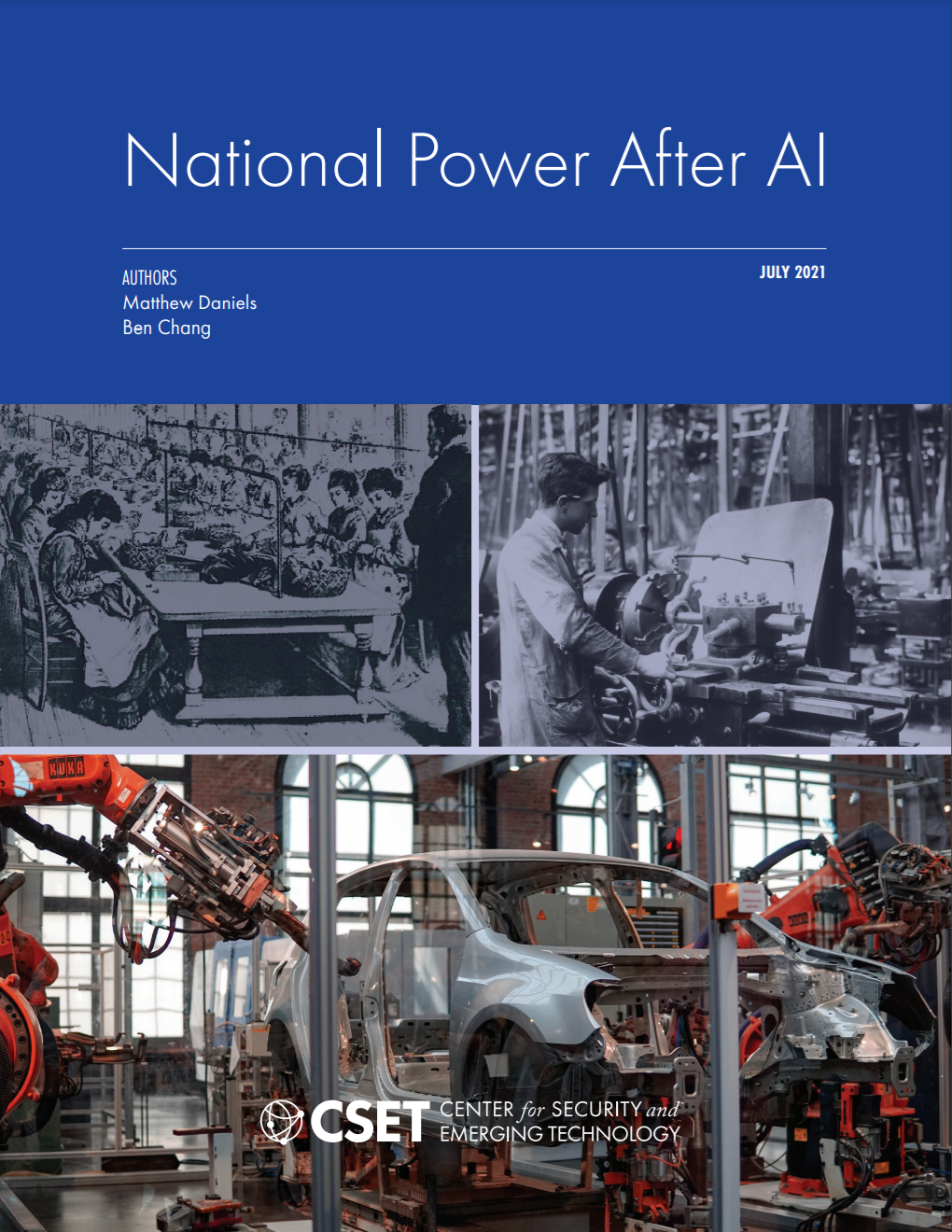 AI technologies will likely alter great power competitions in foundational ways, changing both how nations create power and their motives for wielding it against one another. This paper is a first step toward thinking more expansively about AI & national power and seeking pragmatic insights for long-term U.S. competition with authoritarian governments.

How will artificial intelligence affect long-term U.S.-China competition?1 Many analyses approach this question by focusing on how AI technologies may enhance each side’s current capabilities–making aircraft, businesses, and nations, say, 10 percent faster and stronger. This perspective essentially suggests a broad race: the side that leverages modern AI technologies the most and soonest wins.

This view can mislead American strategists in two ways. First, it ignores the new vulnerabilities, costs, and accident risks associated with adopting modern AI technologies in certain settings.2 Second, and most importantly, over the longer term, AI technologies will likely alter great power competitions in foundational ways, changing both how nations create power and their motives for wielding power against one another. In short, strategists are trying to create strategies for a game while the field, the players, the ball, and the rules could be changing.

Why? Major innovations themselves not only generate value for leading states, but also change the relative value of previously acquired assets, organizational practices, and defense strategies. Germany’s development of Blitzkrieg during the interwar period, which represented a new way of using motorized vehicles and radios, is often cited as a military-specific example of important new organizational approaches. The German military effectively adapted their operational practices to suit new technologies. But the impact of major innovations can also be broader. For instance, the Industrial Revolution made new factors central to national power, including access to certain resources and the industrial capacity to leverage them. These broader effects take more time to appear, but their impact can be enormous: industrialization was not “revolutionary” because of the rapidity of change, as it unfolded in waves over decades, but because of its ultimate magnitude of change. With AI technologies, progressive substitution of machines for human cognitive labor may eventually have economic and social implications on a scale comparable to the Industrial Revolution. And like the Industrial Revolution, this AI revolution will change some fundamental elements of national power.

These foundational shifts can render some of the current processes and resources of a state obsolete, of course, but it can also make what states are already doing, or already possess, more valuable. For example, the invention of railroads was a boon for those rich in steel precursors.3 With AI, data-hungry algorithms may advantage authoritarian states, which already surveil and catalogue their own populations with little regard for human rights.4

We suggest an “evolutionary” view of technological change: major, widely diffused innovations are akin to environmental shifts, affecting the competitive capacity of states based on their existing trends in population, resources, institutions, character, and policies. Some previously “maladaptive” factors may become advantageous, and vice versa; states will adapt their institutions, organizations, and policies to the new environment in different ways and to varying degrees, and consequently gain or lose relative power as a result. Nations that primarily focus on AI technologies as offering marginal improvements in existing capabilities (“helping to build better mousetraps”) will eventually miss larger opportunities to adapt. This paper is a first step into thinking more expansively about AI and national power. In what follows, we first explain this evolutionary view in greater detail before applying it to AI.

Ultimately, we seek pragmatic insights for long-term U.S. competition with authoritarian governments like that of China. For the foreseeable future, China’s population and total economic size will very likely exceed those of the United States, even as its per capita GDP lags. This new challenge differs fundamentally from the United States’ Cold War competition with the Soviet Union, and success will require thoughtful and timely diagnosis of modern environmental shifts in how states can produce power. These insights can guide our own investments as well as our approach to alliances. The United States has many sources of advantage and strength, and as Joseph Nye rightly observed, “Our greatest mistake in such a world would be to fall into one-dimensional analysis and to believe that investing in military power alone will ensure our strength.”5 This paper is a first step, intended to provoke new questions and provide a framework for assessing the relationship between AI and national power.6