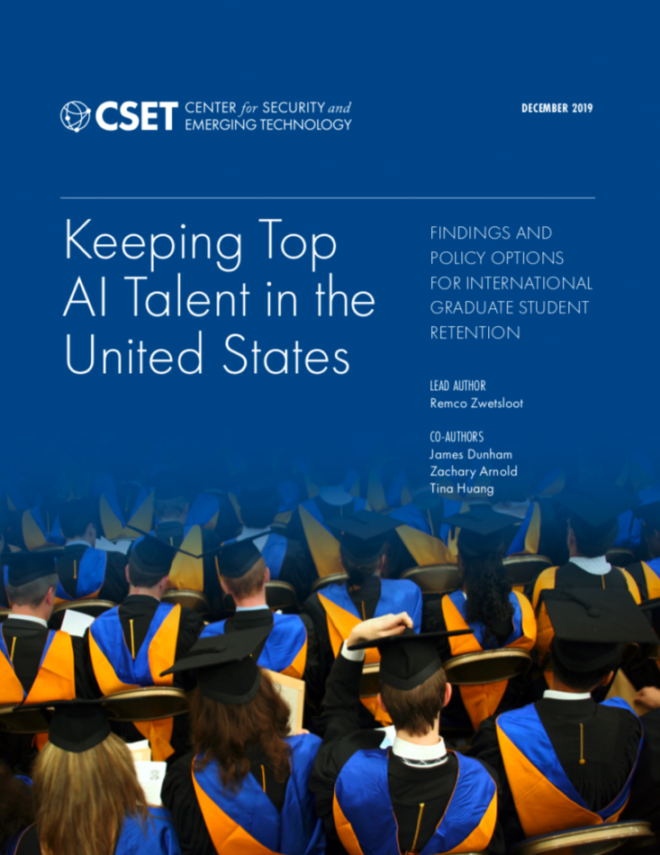 Talent is core to U.S. competitiveness in artificial intelligence, and international graduate students are a large source of AI talent for the United States. More than half of the AI workforce in the United States was born abroad, as were around two-thirds of current graduate students in AI-related fields. Tens of thousands of international students get AI-related degrees at U.S. universities every year. Retaining them, and ensuring a steady future talent inflow, is among the most important things the United States can do to address persistent domestic AI workforce shortages and to remain the global leader in AI.

This paper holds both good news and bad news for the United States. The good news is that student retention has historically been a core U.S. strength, with well over 80 percent of international U.S.-trained AI PhDs staying in the country, including those from AI competitors such as China. By contrast, other studies have found that the vast majority of China-trained AI talent currently lives outside China. Moreover, contrary to popular perception and anecdotal reports, there is no evidence of recent declines in U.S. retention rates.

Without serious immigration policy changes, the United States stands to lose a vital asset in the international competition for AI leadership.Remco Zwetsloot

The bad news is that two trends are placing this U.S. strength in student retention at risk. The immigration obstacles international graduates face have grown steadily in the past two decades and have worsened in recent years. At the same time, other countries are investing heavily in AI talent attraction and retention, pumping money into their domestic AI ecosystems and opening up their immigration systems to foreign AI talent. In the past, the United States could rely on its status as the world’s sole science and technology superpower to compensate for the flaws of its immigration system, but in today’s more competitive world, complacency is likely to come at a higher cost. Without serious immigration policy changes, the United States stands to lose a vital asset in the international competition for AI leadership.

Results presented below are based on CSET-collected comprehensive career data on 2,000 recent AI PhD graduates from U.S. universities, as well as original analysis of 43,000 immigration records of AI professionals and multiple AI-related survey instruments. Key findings include the following:

On the policy font, research highlights two important trends that, together, could erode the U.S. AI talent advantage:

Based on these findings, the report lays out two priorities and several concrete options for U.S. policymakers: