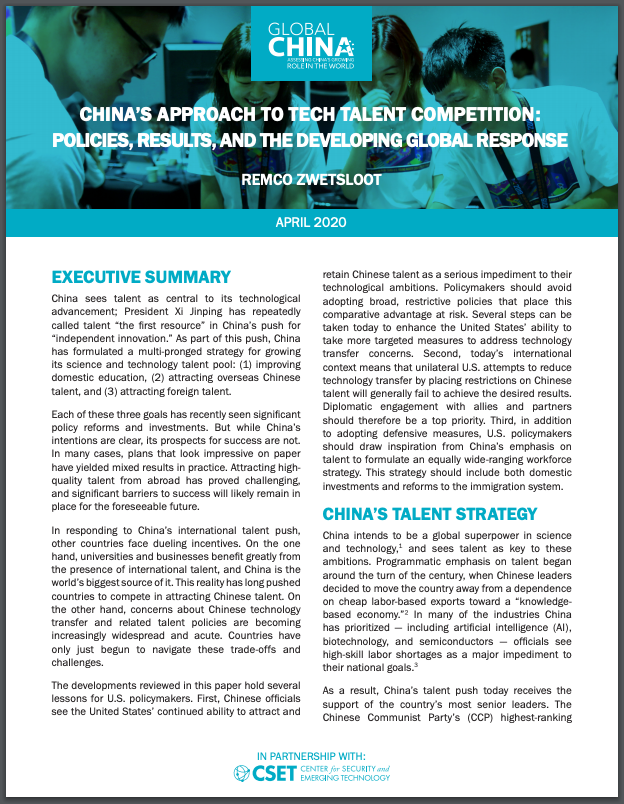 This paper is part of the Brookings Institution’s Global China project.

Each of these three goals has recently seen significant policy reforms and investments. But while China’s intentions are clear, its prospects for success are not. In many cases, plans that look impressive on paper have yielded mixed results in practice. Attracting high-quality talent from abroad has proved challenging, and significant barriers to success will likely remain in place for the foreseeable future.

In responding to China’s international talent push, other countries face dueling incentives. On the one hand, universities and businesses benefit greatly from the presence of international talent, and China is the world’s biggest source of it. This reality has long pushed countries to compete in attracting Chinese talent. On the other hand, concerns about Chinese technology transfer and related talent policies are becoming increasingly widespread and acute. Countries have only just begun to navigate these trade-offs and challenges.

The developments reviewed in this paper hold several lessons for U.S. policymakers. First, Chinese officials see the United States’ continued ability to attract and retain Chinese talent as a serious impediment to their technological ambitions. Policymakers should avoid adopting broad, restrictive policies that place this comparative advantage at risk. Several steps can be taken today to enhance the United States’ ability to take more targeted measures to address technology transfer concerns. Second, today’s international context means that unilateral U.S. attempts to reduce technology transfer by placing restrictions on Chinese talent will generally fail to achieve the desired results. Diplomatic engagement with allies and partners should therefore be a top priority. Third, in addition to adopting defensive measures, U.S. policymakers should draw inspiration from China’s emphasis on talent to formulate an equally wide-ranging workforce strategy. This strategy should include both domestic investments and reforms to the immigration system.