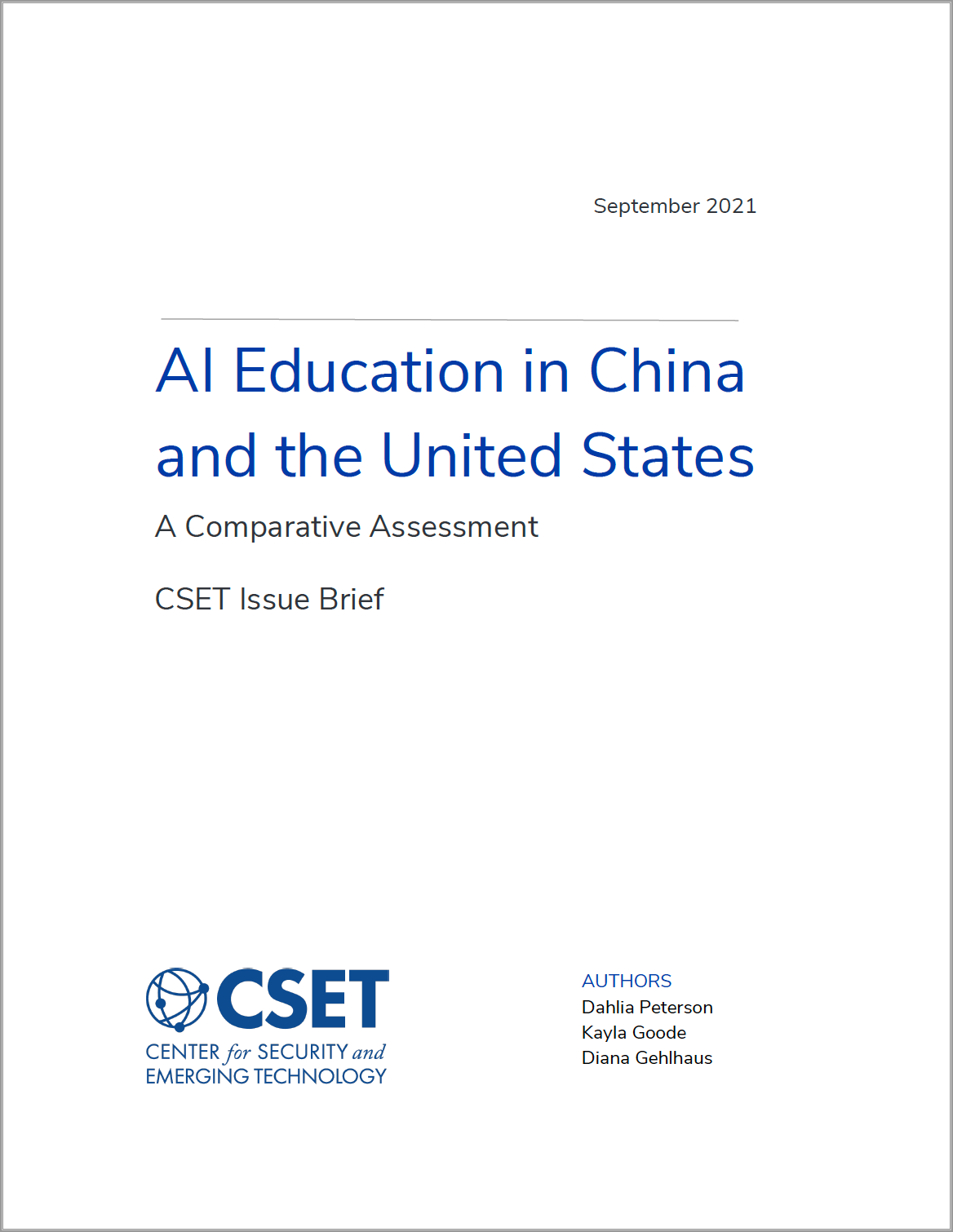 A globally competitive AI workforce hinges on the education, development, and sustainment of the best and brightest AI talent. This issue brief compares efforts to integrate AI education in China and the United States, and what advantages and disadvantages this entails. The authors consider key differences in system design and oversight, as well as strategic planning. They then explore implications for the U.S. national security community.

Many in the national security community are concerned about China’s rising dominance in artificial intelligence and AI talent. That makes leading in AI workforce competitiveness critical, which hinges on developing and sustaining the best and brightest AI talent. This includes top-tier computer scientists, software engineers, database architects, and other technical workers that can effectively create, modify, and operate AI-enabled machines and other products.

This issue brief informs the question of strategic advantage in AI talent by comparing efforts to integrate AI education in China and the United States. We consider key differences in system design and oversight, as well as in strategic planning. We then explore implications for maintaining a competitive edge in AI talent. (This report accompanies an introductory brief of both countries’ education systems: “Education in China and the United States: A Comparative System Overview.”)

Both the United States and China are making progress in integrating AI education into their workforce development systems, but are approaching education goals in different ways. China is using its centralized authority to mandate AI education in its high school curricula and for AI companies to partner with schools and universities to train students. Since 2018, the government also approved 345 universities to offer an AI major, now the country’s most popular new major, and at least 34 universities have launched their own AI institutes. The United States is experimenting with AI education curricula and industry partnership initiatives, although in a piecemeal way that varies by state and places a heavier emphasis on computer science education.

Both countries’ approaches could result in uneven levels of AI workforce competitiveness, although for similar and different reasons. China’s centralized push could lead to widespread integration of AI education, but the resulting curricula could be shoddy for the sake of participating in the “AI gold rush.” This risk is especially pronounced in under-resourced areas, which could produce underwhelming results. The United States’ varied, decentralized approach may allow for greater experimentation and innovation in how AI curricula are developed and implemented, but diverse approaches may exacerbate disparities in curriculum rigor, student achievement standards, and educator qualifications. As for similarities, the two countries share hurdles such as the rural-urban divide, equitable access to quality AI education, and teacher quality.

Ultimately, this report suggests future U.S. science and technology education policy should be considered in a globally competitive context instead of viewing it exclusively as a domestic challenge. For the United States, that consideration includes recognizing and capitalizing on its enduring advantage in attracting and retaining elite talent, including Chinese nationals. While this brief does not make policy recommendations for the U.S. education system, the upcoming CSET report “U.S. AI Workforce: Policy Recommendations” addresses some of the direct implications of the findings presented.