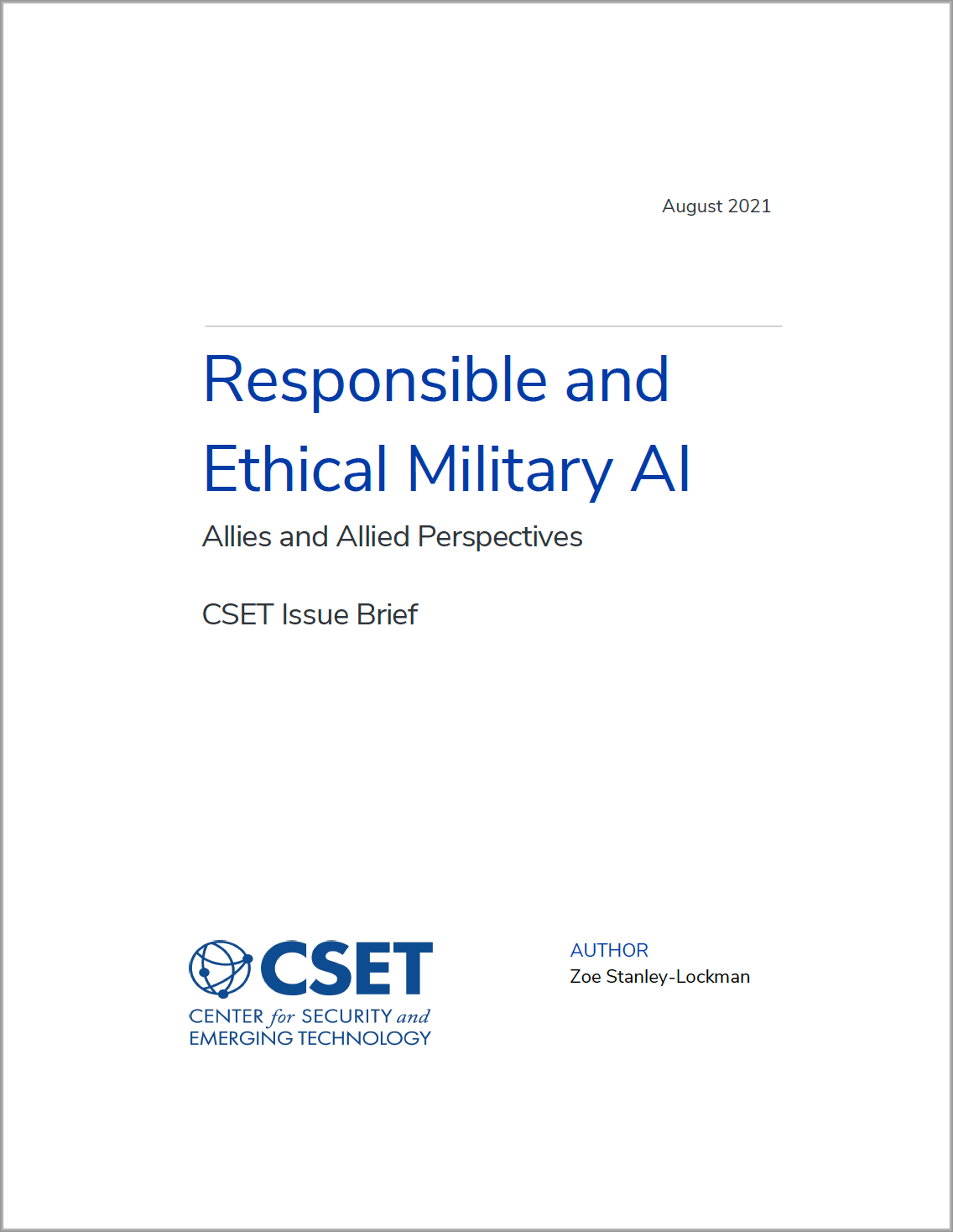 Allies of the United States have begun to develop their own policy approaches to responsible military use of artificial intelligence. This issue brief looks at key allies with articulated, emerging, and nascent views on how to manage ethical risk in adopting military AI. The report compares their convergences and divergences, offering pathways for the United States, its allies, and multilateral institutions to develop common approaches to responsible AI implementation.

Since the U.S. Department of Defense adopted its five safe and ethical principles for AI in February 2020, the focus has shifted toward operationalizing them. Notably, implementation efforts led by the Joint Artificial Intelligence Center (JAIC) coalesce around “responsible AI” (RAI) as the framework for DOD, including for collaboration efforts with allies and partners.1

With a DOD RAI Strategy and Implementation Pathway in the making, the first step to leading global RAI in the military domain is understanding how other countries address such issues themselves. This report examines how key U.S. allies perceive AI ethics for defense.

Defense collaboration in AI builds on the broader U.S. strategic consensus that allies and partners offer comparative advantages relative to China and Russia, which often act alone, and that securing AI leadership is critical to maintaining the U.S. strategic position and technological edge. Partnering with other democratic countries therefore has implications for successfully achieving these strategic goals. Yet the military aspects of responsible AI that go beyond debates on autonomous weapons systems are currently under-discussed.

Responsible and ethical military AI between allies is important because policy alignment can improve interoperability in doctrine, procedures, legal frameworks, and technical implementation measures. Agreeing not only on human centricity for militaries adopting technology, but also on the ways that accountability and ethical principles enter into the design, development, deployment, and diffusion of AI helps reinforce strategic democratic advantages. Conversely, ethical gaps between allied militaries could have dangerous consequences that imperil both political cohesion and coalition success. More specifically, if allies do not agree on their responsibilities and risk analyses around military AI, then gaps could emerge in political willingness to share risk in coalition operations and authorization to operate alongside one another. Even though the United States is the only country to have adopted ethical principles for defense, key allies are formulating their own frameworks to account for ethical risks along the AI lifecycle. This report explores these various documents, which have thus far been understudied, at least in tandem. Overall, the analysis highlights both convergences in ethical approaches to military AI and burgeoning differences that could turn into political or operational liabilities.

The key takeaways are as follows:

The Department of Defense can already begin applying its existing international science and technology agreements, global scientific networks, and role in multilateral institutions to stimulate digital defense cooperation. This issue brief frames this collection of options as a military AI cooperation toolbox, finding that the available tools offer valuable pathways to align policies, advance research, development, and testing, and to connect personnel–albeit in more structured ways in the Euro-Atlantic than in the Indo-Pacific.