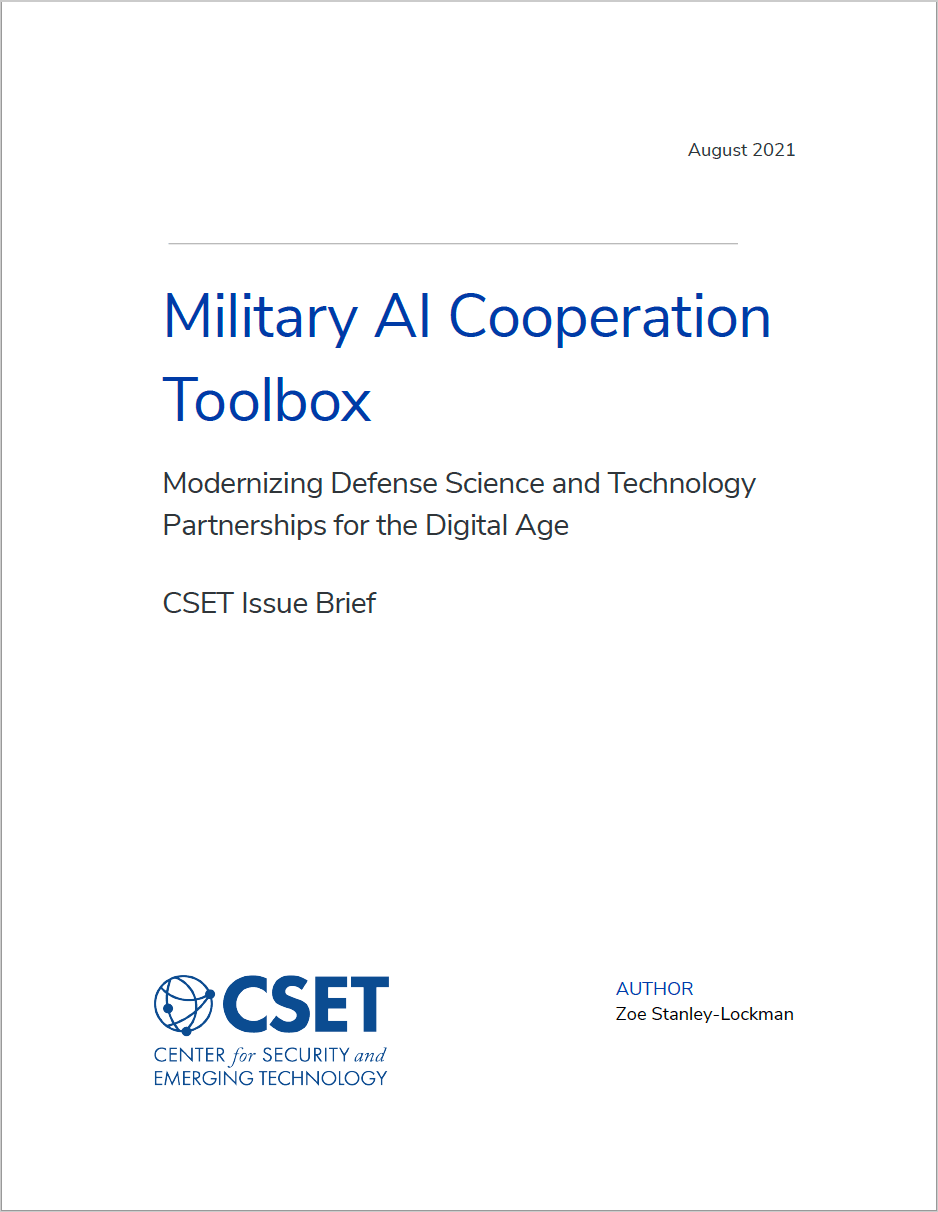 Modernizing Defense Science and Technology Partnerships for the Digital Age

The Department of Defense can already begin applying its existing international science and technology agreements, global scientific networks, and role in multilateral institutions to stimulate digital defense cooperation. This issue brief frames this collection of options as a military AI cooperation toolbox, finding that the available tools offer valuable pathways to align policies, advance research, development, and testing, and to connect personnel–albeit in more structured ways in the Euro-Atlantic than in the Indo-Pacific.

The United States looks at leadership in artificial intelligence (AI) as critical to both advancing its strategic position in the international system and sustaining its military advantage into the future. The U.S. network of allies and partners is an asymmetric asset in service of these aims, as affirmed in national security and defense policy aimed at preparing the United States for the current era of strategic competition.

Most notably, key initiatives announced in the Department of Defense (DOD) AI Strategy and recommendations from the National Security Commission on Artificial Intelligence indicate the importance of international engagement for AI safety, security, interoperability, and alignment with democratic values.1

In short, there is a consensus that strengthening alliances and partnerships is important not just because the United States acts in coalitions, but also because China and Russia often act alone. AI and other emerging technologies are at the heart of competition with these near-peer competitors because of how technological acceleration drives military advancements, spurs economic growth, and shapes governance models in the 21st century. The United States can neither meet the challenges China poses, nor reap the benefits that come with shaping a democratic trajectory for AI, without deepening cooperation with its allies and partners.

Within this context, this report focuses on the imperative to safeguard the advantage of the United States and its network of partners and allies, relative to potential adversaries, through robust military relationships based on interoperable forces and cutting-edge technologies. DOD already has several tools at its disposal to deepen science and technology (S&T) cooperation with its allies and international security partners. But to capitalize on their full potential for AI, the department needs to re-envision and better integrate them.

To this end, the analysis here frames the existing defense S&T agreements, military S&T exchanges, and elements of multilateral institutions as a military AI cooperation toolbox. This effort goes beyond solely pooling resources for AI-enabled capability development, to also include policy alignment; the testing, evaluation, validation, and verification (TEVV) pipeline; research and development (R&D), personnel exchanges; data sharing; and standardization. Rather than proposing new agreements, the aim here is to answer how DOD can leverage its existing mechanisms of S&T cooperation to support military cooperation in the digital age, making sure that relevant resources and frameworks do not go untapped in the quest for AI leadership and future coalition success.

While challenges, including the sensitivity around data exchanges and differing policy views on technology policy, should be acknowledged, they can also be motivating forces for cooperation to alleviate these barriers over time. In other words, the existing tools can help create more buy-in for longer term gains in political trust, cohesion, and interoperability, so that cooperation helps meet the shared challenges of digital authoritarianism and technology-driven changes to the international security environment.

The key findings are:

While some aspects of military AI cooperation may require new investments, mechanisms, and agreements, that should not preclude the many ways that existing tools can be put to new use. The military AI cooperation toolbox is attractive precisely because it can be activated in the near term, meeting the urgency of building interoperability and advancing AI with allies and partners as early as possible.