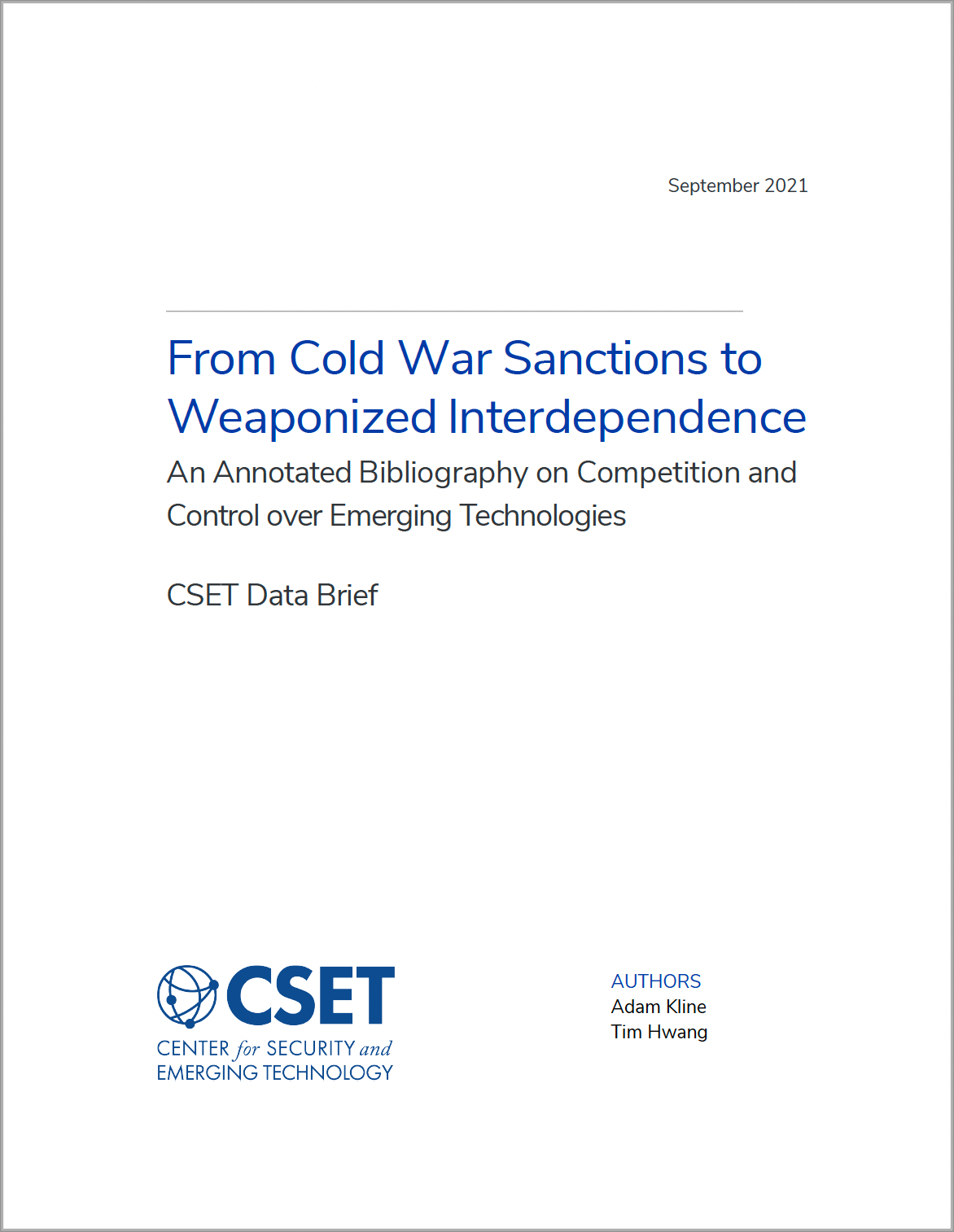 An Annotated Bibliography on Competition and Control over Emerging Technologies

As U.S. policymakers grapple with the need to control international technology flows, this annotated bibliography distills key lessons and surveys 50 years of scholarship, government documents, and commentary. The resources it presents are at the intersection of international economics and technology and span from the Cold War to the current challenges surrounding U.S.-China relations.

CSET is providing this annotated bibliography as a resource for researchers interested in studying the history and future of international competition and control over emerging technologies. We hope that this review will prove useful for scholars interested in the history of Cold War economic and technological policies, technological competitiveness, economic statecraft, and the escalating technological rivalry between Beijing and Washington. It covers decades of scholarship on technology and strategic economic competition, drawing from a wide variety of sources, from journal articles to declassified CIA documents, and a range of perspectives, from academics to policymakers.

The bibliography includes five main sections. Each section features an introduction synthesizing its contents and then lists and briefly summarizes individual sources in chronological order. First is a section surveying the hefty theoretical literature on economic interdependence, conflict, and economic statecraft, including perennial debates over the “commercial peace” theory and the efficacy of sanctions. The next two sections review strategic economic competition, export controls, and technology transfer policies during the Cold War and the post-Cold War era. The fourth section concentrates on U.S. fears of domestic economic decline and technological dependence on Japan in the 1980s and early 1990s. The final section focuses on scholarly discussions of China’s rise, U.S. export controls and technology transfer policies toward Beijing, and a potential U.S.-China decoupling.

This review suggests several important lessons for scholars and policymakers grappling with the thorny challenges of strategic economic and technological competition.

First, economics and technology are crucial components of national security and key factors influencing geopolitical outcomes. A strong economy can achieve technological breakthroughs that, in turn, help fuel economic growth and development. States can exploit economic and technological power to wield international power and influence, including by drawing upon their technological capabilities to develop cutting-edge weapon systems that enhance national military might. In the Cold War, the economic and technological advantages enjoyed by the United States and its allies forced the Soviet Union to play catch-up and helped NATO offset Soviet military advantages. The transatlantic alliance, along with Japan, established the Coordinating Committee for Multilateral Export Controls (COCOM) early in the Cold War to harmonize technology transfer policy against Communist states. In the 1980s and early 1990s, Japan’s impressive economic growth and technological development led many U.S. observers to fear that Tokyo would convert its burgeoning commercial strength into hard power and match or overtake the United States. Yet in the current U.S. confrontation with China, Washington and Beijing are far more evenly matched, presenting an even greater challenge.

Second, the literature also demonstrates the value and limitations of export controls and technology transfer regulations. Export controls may lead to security gains at the cost of economic and diplomatic losses. For instance, restricting exports of Technology X may deny its military benefits to Country Y; however, the manufacturers of Technology X could suffer lost revenue and reduced competitiveness, and foreign allies may chafe if the regulations impact their own industries. ITAR regulations on the U.S. space industry are an important example of the many unintended consequences of export controls, especially their potentially adverse long-term economic and strategic consequences. There are no hard-and-fast rules governing these calculations, and officials must carefully evaluate trade-offs before implementing wide-ranging technology transfer policies.

Third, many experts agree that when enacting technology controls, policymakers should prioritize multilateralism and coordination with allies over unilateral and abrupt moves that alienate foreign partners. Not only do unilateral export controls run the risk of diplomatic damage, but they are less effective than multilateral efforts. Robust diplomatic, intelligence, and law enforcement cooperation is key to shoring up multilateral technology control regimes. Otherwise, adversaries can capitalize upon allied disunity to obtain protected technologies. The determining factor is the availability of the technology in question, since unilateral export controls are futile if a given technology is easily obtainable through other partner states.

Fourth, export controls are a delaying measure, not a permanent solution for the problem of technology transfer to adversaries. The technological laggard is on the offensive, maintaining the initiative and enjoying plentiful means of acquisition—including cyberespionage, front companies, and insider agents. At the same time, the technological leader is playing defense, forced to continually protect intellectual property, human capital, physical goods, and digital networks. Indeed, even without the benefits of industrial cyberespionage, the Soviet Union still used its intelligence agencies and other state organs to great effect in its decades-long campaigns to acquire advanced foreign technology. Try as they might, it is impossible for states to permanently safeguard technologies against well-resourced and aggressive state acquisition efforts.

The literature on economics, interdependence, and conflict is truly vast and spans centuries. This section covers a number of prominent topics in the domain, including the relationship between interdependence and conflict, the concept of “economic security,” and the disputed efficacy of economic sanctions. This section also covers the theory and practice of embargoes and economic warfare. A perennial academic debate is whether interdependence fosters peace (the “commercial peace” theory) or creates incentives for war. Experts have also considered whether the globalization of production, international financial flows, and an information-based global economy have helped to promote peace. Just as scholars have historically shown how trade can enable a dominant power to cultivate political influence in a less powerful state, more recent work has explored “weaponized interdependence”––the leveraging of economic ties to shape and influence adversary behavior––in international economics and technology. This section also includes a number of case studies exploring economic coercion, from the United States and Hawaii to India and Nepal.