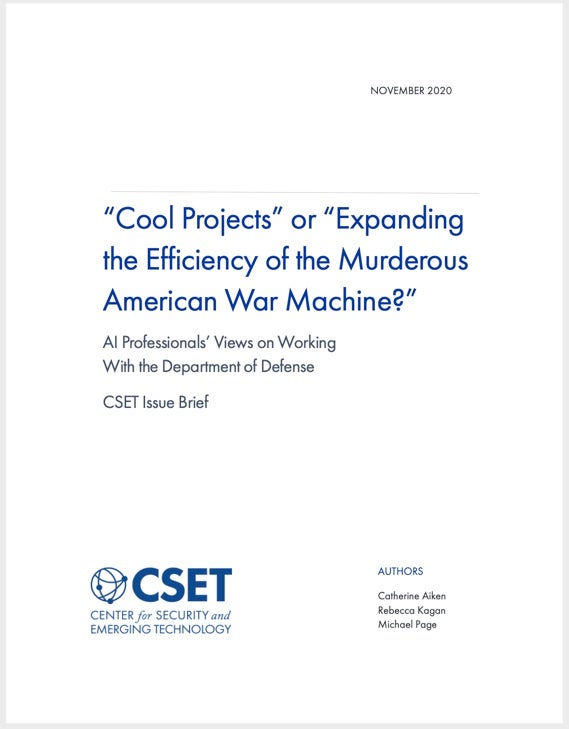 AI Professionals’ Views on Working With the Department of Defense

In a world where computing technologies such as artificial intelligence are increasingly critical for government operations and national security, the nature of the relationship between the U.S. tech industry and the Department of Defense is important. Recent highly publicized incidents of tech employee pushback against DOD-funded AI projects have created the perception of a rift between the tech industry and DOD. If true, such a rift would have serious implications for public policy, national security, and the future of AI. But are recent examples of employee pushback representative of the feelings of the entire tech industry? Specifically, how do tech professionals with AI-relevant skills feel about working on DOD-funded projects?

Key findings from the survey include:

AI professionals are more willing to work on DOD-funded AI projects with humanitarian applications, as opposed to battlefield or back- office applications. Additionally, the ability to provide a global humanitarian benefit is the most frequently cited factor that would increase willingness to work on a DOD AI contract.

AI professionals’ willingness to work on DOD-funded AI projects is also increased if the funding is used solely for basic research. Stronger commitments to safety and privacy as well as projects with defensive applications increase willingness for around 40 percent of AI professionals.

AI professionals who worked at an employer with DOD contracts and those more familiar with DOD tend to be more positive about working on DOD-funded AI projects. Just over half of respondents have worked or currently work at an employer with DOD contracts and about a quarter worked directly on a DOD-funded project. About half of surveyed professionals consider themselves at least somewhat familiar with DOD.