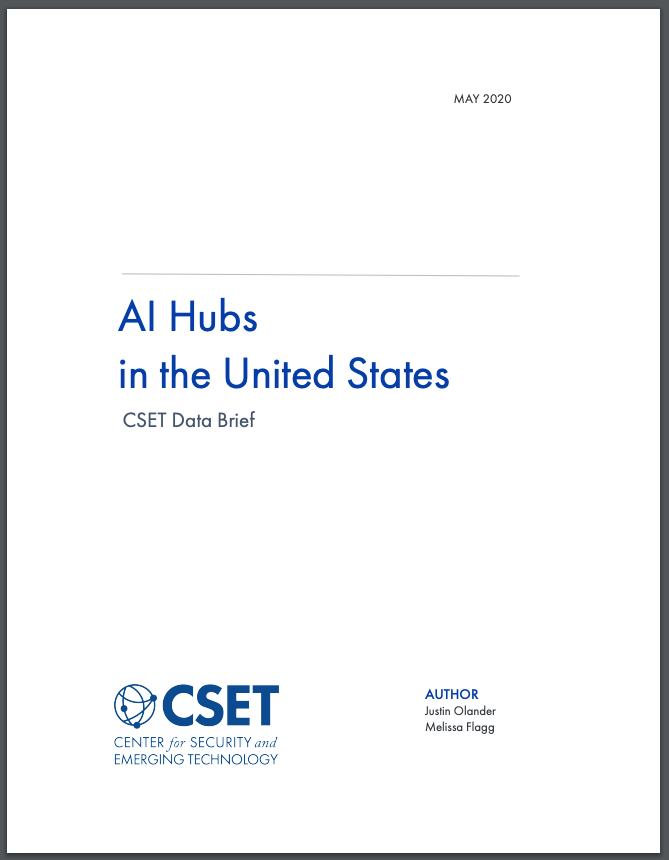 With the increasing importance of artificial intelligence and the competition for AI talent, it is essential to understand the U.S. domestic industrial AI landscape. This data brief maps where AI talent is produced, where it concentrates, and where AI equity funding goes. This mapping reveals distinct AI hubs emerging across the country, with different growth rates, investment levels, and potential access to talent.

With the increasing importance of artificial intelligence and the competition for AI talent, it is essential to understand the U.S. domestic industrial AI landscape. To this end, we mapped where AI talent is produced, where it concentrates, and where AI equity funding goes. This mapping shows distinct AI hubs emerging across the country, with different growth rates, investment levels, and potential access to talent. Talent production, talent employment, and investment are not fully aligned, possibly informing the talent shortage in Silicon Valley and highlighting the opportunity for innovative hubs to develop throughout the nation. The mapping also reveals that, while investment is split along the West and East Coasts, Chinese investment—though modest overall—is concentrated in Silicon Valley.

Figure 1 maps AI talent across the United States: the red pins indicate the top AI university programs, the circle sizes show the fraction of AI talent in an area, and the colors of each circle the rate at which talent is increasing in an area. There are more top AI universities in the eastern half of the country (53 percent) than the western (27 percent). In contrast, AI employment is more diffuse, with 41 percent of the employment on the West Coast and 23 along the East Coast, with multiple hubs on both. Looking more closely, the key centers employing AI professionals are San Francisco (27 percent), New York (13 percent), Seattle (nine percent), and Los Angeles, Boston, and Washington-Baltimore (roughly five percent each). While San Francisco hosts the largest fraction of the AI workforce, the region has the lowest AI employee growth rate at 18 percent, while East Coast hubs grow at between 30 and 57 percent. Additionally, the West Coast attracts a significant portion of its talent from universities based in the eastern United States. San Francisco, for example, attracts 26 percent of its talent from them, while Seattle, Los Angeles, and San Diego each attract about 20 percent of their talent from the east. In contrast, New York, Boston and the Washington-Baltimore region attract only about five percent of their talent from the West Coast.

Melissa Flagg and Justin Olander, "AI Hubs in the United States" (Center for Security and Emerging Technology, May 2020), cset.georgetown.edu/research/ai-hubs-in-the-united-states/. https://doi.org/10.51593/20200006