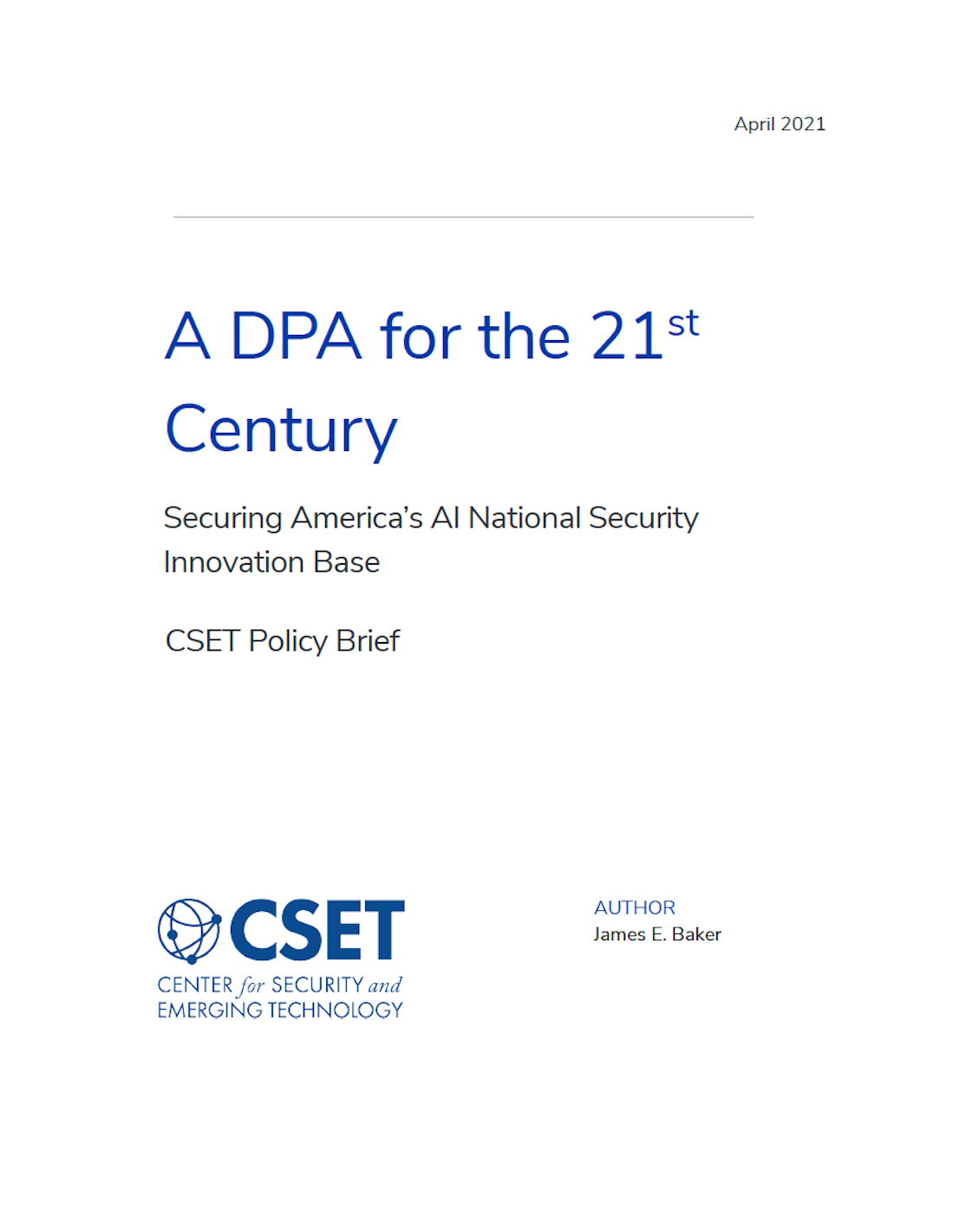 The Defense Production Act can be an effective tool to bring U.S. industrial might to bear on broader national security challenges, including those in technology. If updated and used to its full effect, the DPA could be leveraged to encourage development and governance of artificial intelligence. And debate about the DPA’s use for AI purposes can serve to shape and condition expectations about the role the law’s authorities should or could play, as well as to identify essential legislative gaps.

Some commentators say the field of artificial intelligence is ungovernable. It covers many fields and capabilities, they note, and involves a breadth of private and academic actors, many working in secrecy to protect intellectual property and profit potentials. But it is an overstatement to call AI ungovernable. Several existing laws and executive orders give various agencies and elected officials tools to regulate the national security development of AI, as does the Constitution. Policymakers should become familiar with these tools, examine their strengths and shortcomings, and become involved in efforts to modify and improve the AI governance architecture. As with other “ungovernable” areas, like nonproliferation, where there are also myriad actors and challenges, we can design an effective governance architecture if we are purposeful about doing so. This paper considers one of the most important potential tools in this effort, the Defense Production Act (DPA); however, it would be a more effective tool if updated and used to its full effect.

AI development depends on hardware, data, talent, algorithms, and computational capacity.1 Thus, any law that can (1) help ensure an adequate supply of these assets and in appropriate form; and (2) prioritize the use of these assets to achieve national security policy objectives is an important national security tool. That is not to say the DPA’s full authority should be used at this time. Extraordinary tools, such as the DPA’s allocation authority, might more appropriately be used at a moment of emergency, for example, in time of conflict or should another nation achieve an AI breakout creating decisive security advantage. Thus, at this time, the most important function a debate about the use of the DPA for AI purposes can serve is to shape and condition expectations and understandings about the role such authorities should, or could, play, as well as to identify essential legislative gaps so that we do not learn of these gaps (and are not hesitant to use the authority we have) when the authority is needed. However, in less dramatic manner, the DPA’s other authorities might well be used, or more fully used at this time to shore up America’s AI supply line, as illustrated with the examples below.

While obscure to the public, the DPA got a burst of national attention in early 2020 when the coronavirus pandemic began overwhelming U.S. hospitals, first in New York City and then elsewhere. In the absence of federal leadership, in March 2020 national security specialists familiar with the DPA urged its full use to mobilize the nation’s capacity to provide medical equipment and personal protective equipment (PPE) to address COVID-19. In April 2020, as the spreading virus was depleting national supplies of ventilators and PPE for health workers, President Donald Trump generated headlines by invoking the DPA, ostensibly to compel businesses to manufacture such equipment. A second order authorized the Secretary of Health and Human Services and the Director of the Federal Emergency Management Agency to “use any and all authority available” under the DPA to acquire N95 respirator masks from 3M. By mid-July, however, CNN noted that “the Trump administration has made only sparing use of its authorities [under DPA], leaving front-line workers in dire need of supplies like masks, gowns and gloves.”2 The Trump Administration did eventually use the DPA during the second half of 2020 to prioritize contracts (eighteen times to channel raw materials to the manufacture of vaccines and therapeutics) and to incentivize the production of medical supplies like testing swabs; however, the DPA was never used to full effect, nor in a strategic and transparent manner.

In contrast, as a candidate for the White House, President Biden promised full use of the DPA to put the United States on a “war time” footing to meet COVID supply chain challenges. Since assuming office, the Biden Administration has used the DPA, and other laws, to address bottlenecks in the supply chain for components needed for vaccine manufacture and to prioritize supply contracts to allow Merck to assist in making Johnson & Johnson vaccines. In addition, the Biden Administration has used Title III financing authorities to incentivize the building of factories and supply lines for COVID tests and rubber plants for medical gloves.

What is significant here, is not just that the Biden Administration used the DPA to provide vaccine capacity to plug supply chain gaps, it did so after the president-elect and then president conditioned industry for its use in this manner and directed the federal government to lean into the law. It also made “friendly” use of the DPA, identifying needs in consultation and partnership with industry, with a focus on the result rather than the means. These are lessons worth noting in the AI context going forward. With COVID, as with AI, the legal policy question is not whether and how to use the DPA to accomplish a task but how to use the full range of available law effectively, purposefully to meet the nation’s needs, and in a manner consistent with our values. With COVID, it turned out, the DPA was one of several laws that could be used to harness America’s industrial capacity to address the pandemic.

The government’s handling of the pandemic is a topic for another day. The point here is that the mere mention of the DPA’s potential clout reinforced the view, in some people’s eyes at least, that the law is a vehicle to “nationalize” industry, a “commandeering” authority, which empowers the government to take over and run the nation’s defense industries. This fed into an already existing narrative about government regulation and opposition from the Chamber of Commerce.

In fact, as this paper shows, the DPA contains many different authorities, some narrow and others potentially broad in scope. It is important for policymakers to understand that the DPA is not limited to military equipment and actions, and its powers are not solely addressed to, or limited to, “commandeering.” Rather, the law establishes a national mobilization capacity to bring the industrial might of the U.S. to bear on broader national security challenges, including technology challenges and public health challenges. Thus, the DPA is both a potential macro tool and a micro tool. Its application to artificial intelligence can be substantial.