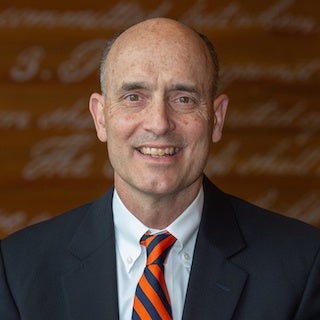 Jamie Baker is a Distinguished Fellow at Georgetown’s Center for Security and Emerging Technology (CSET). In addition to his work at the Center, he is a Professor at Syracuse University, where he directs the Institute for National Security and Counterterrorism. Starting his career as an Infantry Officer in the US Marine Corps, Judge Baker subsequently joined the staff of Sen. Daniel Patrick Moynihan before serving the U.S. Department of State, Foreign Intelligence Advisory Board, and National Security Council. He served on the U.S. Court of Appeals for the Armed Forces for 15 years—the last four as Chief Judge. Since 2015, Judge Baker has served as a Member of the Public Interest Declassification Board, established by Congress in 2000 to promote transparency in national security activities; as a Consultant for the Intelligence Advanced Research Projects Activity, for which he reports on international laws and norms relating to emerging technology; and as Chair of the American Bar Association’s Standing Committee on Law and National Security.

Judge Baker has taught as an Adjunct or Visiting Professor at Yale Law School (his alma mater, where he received a B.A. and J.D.); University of Iowa College of Law; University of Pittsburgh School of Law; Washington University School of Law; and the Georgetown University Law Center. In 2017-2018, he was Robert E. Wilhelm Fellow at MIT’s Center for International Studies, where he pursued scholarship on emerging technologies and artificial intelligence. Judge Baker is the author of two books, In the Common Defense: National Security Law for Perilous Times (Cambridge University Press, 2007) and Regulating Covert Action (Yale University Press, 1992, with Michael Reisman). As a Marine Corps Reserve Officer (1979-2000), he authored the revised Marine Corps Counterinsurgency Field Manual.

The Defense Production Act can be an effective tool to bring U.S. industrial might to bear on broader national security challenges, including those in technology. If updated and used to its full effect, the DPA could be leveraged to encourage development and governance of artificial intelligence. And debate about the DPA’s use for AI purposes can serve to shape and condition expectations about the role the law’s authorities should or could play, as well as to identify essential legislative gaps.

The law plays a vital role in how artificial intelligence can be developed and used in ethical ways. But the law is not enough when it contains gaps due to lack of a federal nexus, interest, or the political will to legislate. And law may be too much if it imposes regulatory rigidity and burdens when flexibility and innovation are required. Sound ethical codes and principles concerning AI can help fill legal gaps. In this paper, CSET Distinguished Fellow James E. Baker offers a primer on the limits and promise of three mechanisms to help shape a regulatory regime that maximizes the benefits of AI and minimizes its potential harms.

CSET and the Syracuse University Institute for Security Policy and Law hosted an October 2020 symposium to discuss AI policy issues facing lawyers, policymakers and technologists. This blog provides a summary of the discussion. A full report is attached.