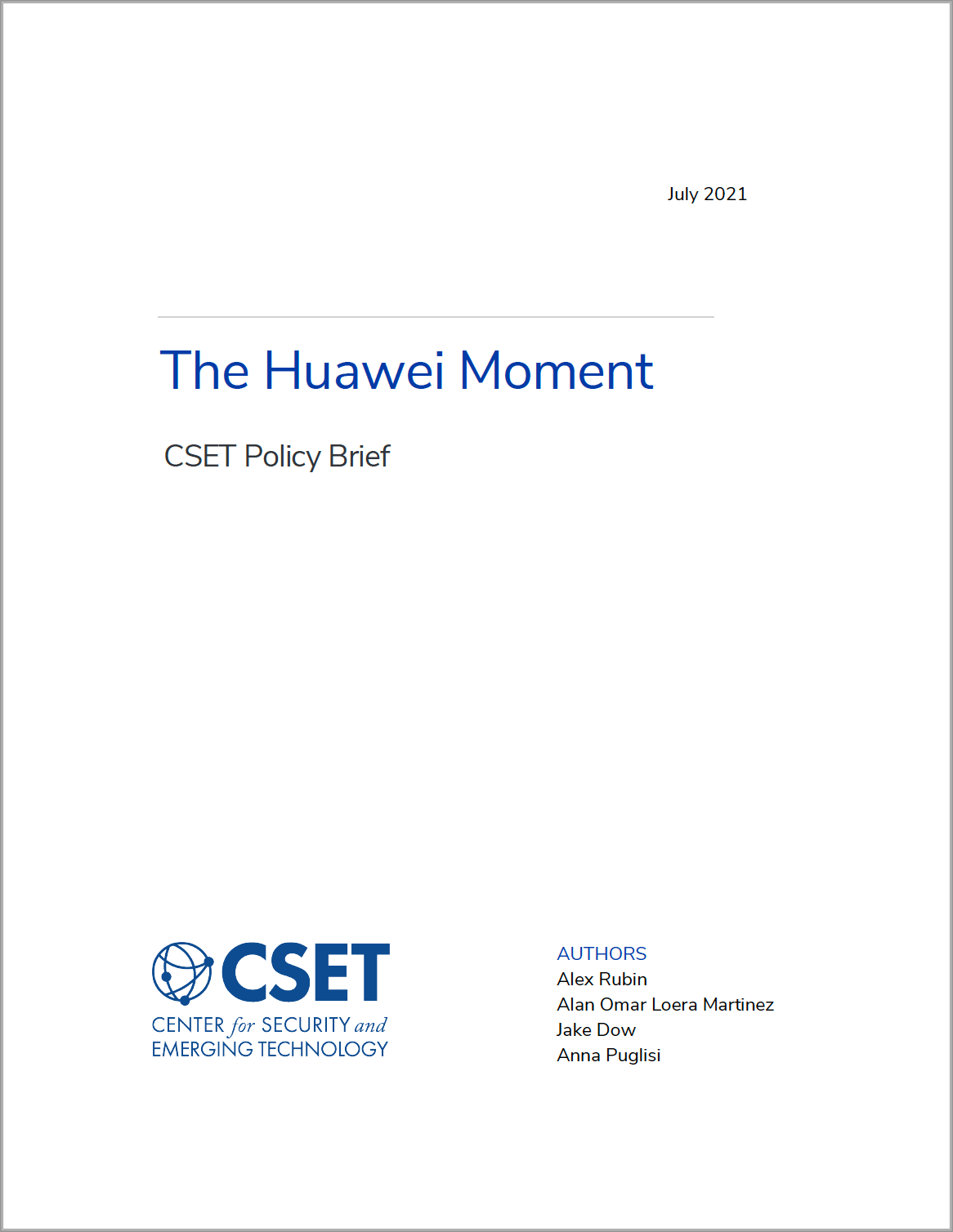 5G hardware will become the backbone of the United States’, and most of the world’s, telecommunications infrastructure. As such, it is a foundational element of U.S. national security. Despite the U.S. lead in telecommunications throughout the twentieth century, it now finds itself at the precipice of deploying a new generation of technology for its critical communications foundation without a U.S. company capable of providing a secure end to end solution. The United States is forced to choose whether to accept the economic costs of delaying deployment of a new generation of communications technology or instead run the security risks of choosing the market leader, Chinese firm Huawei.

How did Washington, at the beginning of the twenty-first century, not take action to prevent a geopolitical competitor from taking leadership in telecommunications, a key piece of national security relevant critical infrastructure? Strategic investments and support by the U.S. government facilitated U.S. telecommunications equipment firms, AT&T prime among them, to lead the field and develop world-changing technological innovations that spurred the creation of new sectors.

However, over time, U.S. firms lost their market leader positions. The exact causes have been debated, but contributing factors are generally thought to include antitrust pressures from the U.S. Department of Justice to break apart a regulated monopoly, along with fundamental changes in how U.S. corporations operate. The bigger problem is that the U.S. government failed to monitor the decline of U.S. leadership in a critical national security infrastructure area and when national security concerns were raised about this, did not use the tools available to the government to attempt to alter the situation.

Many factors inhibited the types of long-term investments necessary for sustained competitiveness and innovation in the telecommunications industry. Among them include changing perceptions in Washington about industrial policy. The U.S. private sector’s prioritization of short-term profits, inhibited the type of research and development (R&D) investments that were necessary for preserving overall competitiveness and innovation in telecommunications hardware—which Huawei has developed—that is defined by generational updates that occur over 10 to 15 years.

In contrast, the Chinese government made advanced telecommunications a national priority and provided a variety of support to a new entrant in the telecommunications equipment industry, Huawei. Buoyed by R&D subsidies, export financing, diplomatic support, and a guaranteed market, Huawei progressively grew its market share overseas and devoted significant investments to R&D. It moved from being largely a provider of low-end equipment to emerging markets to being the world leader in the next generation of wireless networks.

Chinese government support for Huawei goes far beyond traditional industrial policies seen in Europe and Asia. It is comprehensive and represents an alternative blueprint for the development of other emerging technologies and industries. It also highlights the limitations of relying on market-driven development for key technologies when a strategic competitor has made development of that technology a national strategic goal.

The juxtaposition of the U.S. telecommunications hardware industry’s progressive decline and Huawei’s rise during the same period of roughly three decades highlights the necessity of government support for strategic industries. This is particularly true when private profits do not align with national interests—as was the case in telecommunications equipment. The 5G case study also provides a cautionary tale for additional strategic emerging industries—such as AI, biotechnology, and clean energy. These industries might succumb to similar market failures if there is no support for the foundational research, facilities, and talent development that support them over the long-term. This may be the case especially when nascent research and companies are forced to compete with strategic competitors backed by a nationstate.

The characteristics of 5G—small profit margins and longtime horizons—have broader applicability to other technologies that, without efforts to adjust the market incentives, are likely to succumb to similar predicaments for the United States. As Washington discusses how best to support development efforts in emerging technologies, this study argues for a focus on those national security relevant technologies that are most at risk of foreign adversarial competition—not only military related technology. This involves increased investments and strategic planning that builds robust private-public partnerships, and supports the development of key enabling technology, infrastructure, and human capital. The United States has tools it can use—both carrots and sticks—to support a proactive approach to supporting key areas of development with national security implications. Tools that the United States has used in the past successfully to promote technology development and that could be used again include:

R&D Funding: While the percentage of government funding has shrunk over the past decades, it still provides a key piece of the national innovation base that is not prioritized by the private sector. U.S. government funding provides foundational discoveries that feed into both commercial and military developments.

Public Procurement: The U.S. government has used the power of federal procurement dollars to promote the development of nascent industries and help them reach economies of scale and commercialize their products.

Export Financing: The United States has provided strategic financial support for foreign firms to purchase goods from U.S. companies that are key players in the U.S. economy, providers of goods to the U.S. military, or support U.S. foreign policy objectives.