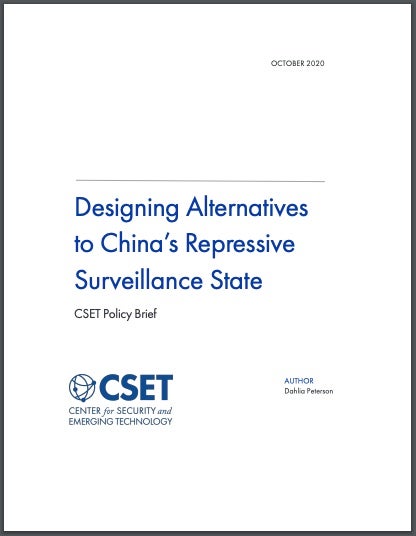 Since the 1950s, China has built a formidable surveillance state increasingly reliant on artificial intelligence (AI) technologies. The COVID-19 pandemic has provided China an opportunity to soften the reputation of its surveillance technologies, which include tracking apps, surveillance by drones, cameras inside and outside houses, remote temperature scanning, and upgraded facial recognition to identify mask wearers. These technologies have now been legitimized for public health purposes. COVID-19 may accelerate China’s domestic surveillance efforts and lead to investments creating capabilities preserved post-COVID.

Globally, China’s surveillance model may gain even more legitimacy as a vital tool beyond the pandemic, further deepening normative advantages for China by allowing the strategic expansion of Chinese surveillance companies worldwide. Since 2008, at least 80 countries have adopted Chinese surveillance technology platforms. These platforms are more than just security cameras: they integrate multiple government databases and provide analytic capabilities that can support multiple command and control centers.  If democratic governments do not successfully demonstrate how to protect public health and human rights, they risk losing the mantle of global leadership in the 21st century. The United States must therefore better understand China’s surveillance infrastructure and why it appeals to adopting countries, using this knowledge to advance an alternate vision with its democratic allies.

China employs surveillance to repress broad swaths of its population—most notably the Uyghurs in Xinjiang and nationwide—and enables other countries to execute their own surveillance systems through export of its technologies. However, several nationwide surveillance programs have escaped sustained attention. This paper will detail how these programs work and how they have enabled the deployment of current COVID-19 surveillance techniques.

The United States and its allies can meet these challenges in several ways. First, the United States must reduce domestic human rights harms and racial injustice by its own companies and institutions. Second, the State Department’s Bureau of Democracy, Human Rights and Labor (DRL) can host Track 1.5 dialogues modeled off State’s Civil Society 2.0 and the Open Government Partnership to engage democratic government and non-government stakeholders in Europe, Asia, and beyond. These dialogues can identify areas and companies engendering the greatest human rights harms from surveillance, compare and obtain best practices from existing privacy and surveillance legislation, and coordinate with the European approach to surveillance export controls—which aims to restrict surveillance technology exports on normative and non-military human rights grounds.

On the technical level, national research funding organizations such as the National Science Foundation (NSF) and the Defense Advanced Research Projects Agency should support research on privacy-preserving facial recognition systems. Bodies such as the National Institute of Standards and Technology should also expand prior research on error mitigation in facial recognition. U.S. representatives should actively engage the Global Partnership on AI’s technical expertise to propose alternate facial recognition standards to Chinese companies’ submissions at the United Nations’ International Telecommunications Union.