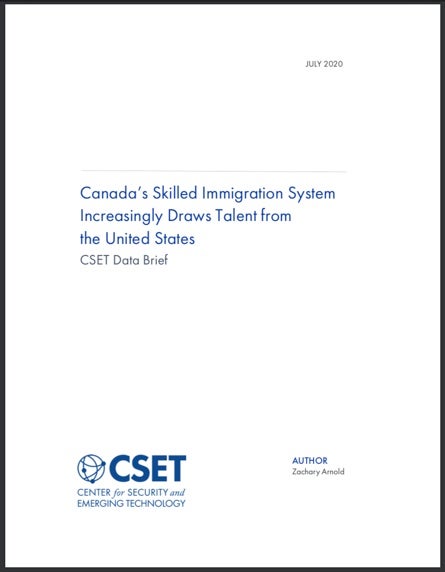 The number of U.S. residents who advanced through Express Entry, Canada’s flagship skilled immigration program, rose 75% between 2017 and 2019, a much faster rate of growth than for other countries. This growth was entirely due to successful submissions from U.S. noncitizens, which rose at least 128% during this period. In total, from 2017 to 2019, more than 20,000 noncitizen U.S. residents sought and received invitations to apply for permanent residence in Canada through Express Entry. Analysis of this data suggests that skilled foreign-born workers may be leaving the United States for Canada in increasing numbers.

Governments around the world are competing to attract talent from abroad, and many have set their sights on the United States – in part because they think U.S. immigration policy is driving skilled foreign-born workers away.1 Canada arguably leads this competition. In recent years, the Canadian government developed a simpler and more generous immigration system for skilled workers, nurtured cutting-edge tech companies capable of drawing talent from around the world, and even set up billboards in Silicon Valley encouraging immigrant tech workers to relocate north.2

Given these efforts and close geographic and cultural ties, Canada is uniquely well positioned to attract talent away from the United States.3 But so far, the evidence that skilled workers are now avoiding or leaving the country in large numbers has mostly been anecdotal.4 At least before the COVID-19 pandemic, key U.S. immigration pathways such as the H-1B visa and employment-based green cards remained oversubscribed, and large majorities of foreign-born STEM PhD students at American universities hoped to stay in the United States after graduating.5

At the same time, scattered but worrying signs have indicated that the situation may be changing. For example, the number of foreign STEM students studying in the United States has fallen, and growth in the STEM Optional Practical Training work program for international students has slowed considerably.6 Now, new data from Canada’s flagship skilled immigration program provide further evidence that America’s foreign-born talent base may be eroding.

Express Entry is the main intake system for skilled foreigners seeking permanent residence in Canada. Express Entry candidates are scored on criteria including but not limited to work experience, education, age, language proficiency, and family ties to Canada.7 Those scoring above a specified cutoff receive “invitations to apply” (ITAs) for permanent residence.8

Canada’s immigration ministry recently published updated Express Entry statistics for calendar years 2017, 2018 and 2019.9 These statistics show that rising numbers of U.S. residents, most of whom are not U.S. citizens, are successfully pursuing invitations to resettle permanently in Canada.

The recently released data doesn’t include the number of invitations issued to noncitizen residents of the United States. In the last row of Table 1, we calculate the minimum possible value for this number by assuming that every U.S. citizen who received an ITA was also a U.S. resident.11 Under this assumption, 8,624 U.S. residents who were not U.S. citizens were selected to apply for permanent residence in Canada in 2019 – an estimated increase of 128% from 2017. In total, over 20,000 noncitizen U.S. residents advanced through Express Entry between 2017 and 2019.

Notably, ITAs issued to U.S. residents grew much faster during this period than those granted to residents of other countries, as shown in Table 2. U.S. residents’ rate of growth outpaced every other country in the top ten other than Morocco. Although a growth rate specifically for U.S. noncitizen residents is not reported, because ITAs granted to U.S. citizens fell during the same period, noncitizens must have accounted for all of this growth.12

More U.S. residents are advancing through the Express Entry program. That means either more U.S. residents are seeking permanent residence in Canada, or U.S. residents who are seeking permanent residence in Canada are becoming more qualified according to the Express Entry scoring criteria, or both.13 It’s not clear from the recently published data which is the case, but none of these possibilities is encouraging for the United States. In addition, the fact that U.S. noncitizens are driving the trends explored in this paper strongly suggests the combination of Canadian recruitment and increasingly restrictive American immigration policy is playing a role in pushing talent north.14

If skilled workers are leaving the United States, Canada is not the only nation that stands to benefit. Many other countries have the resources and political will to attract globally mobile talent.15 If Canada succeeds in recruiting skilled workers from the United States, other countries could too. To avoid falling behind in the global competition for talent, the United States should invest more resources in STEM research and education, lift outdated and counterproductive immigration restrictions, and build new pathways for talented individuals to live, work and innovate in America.